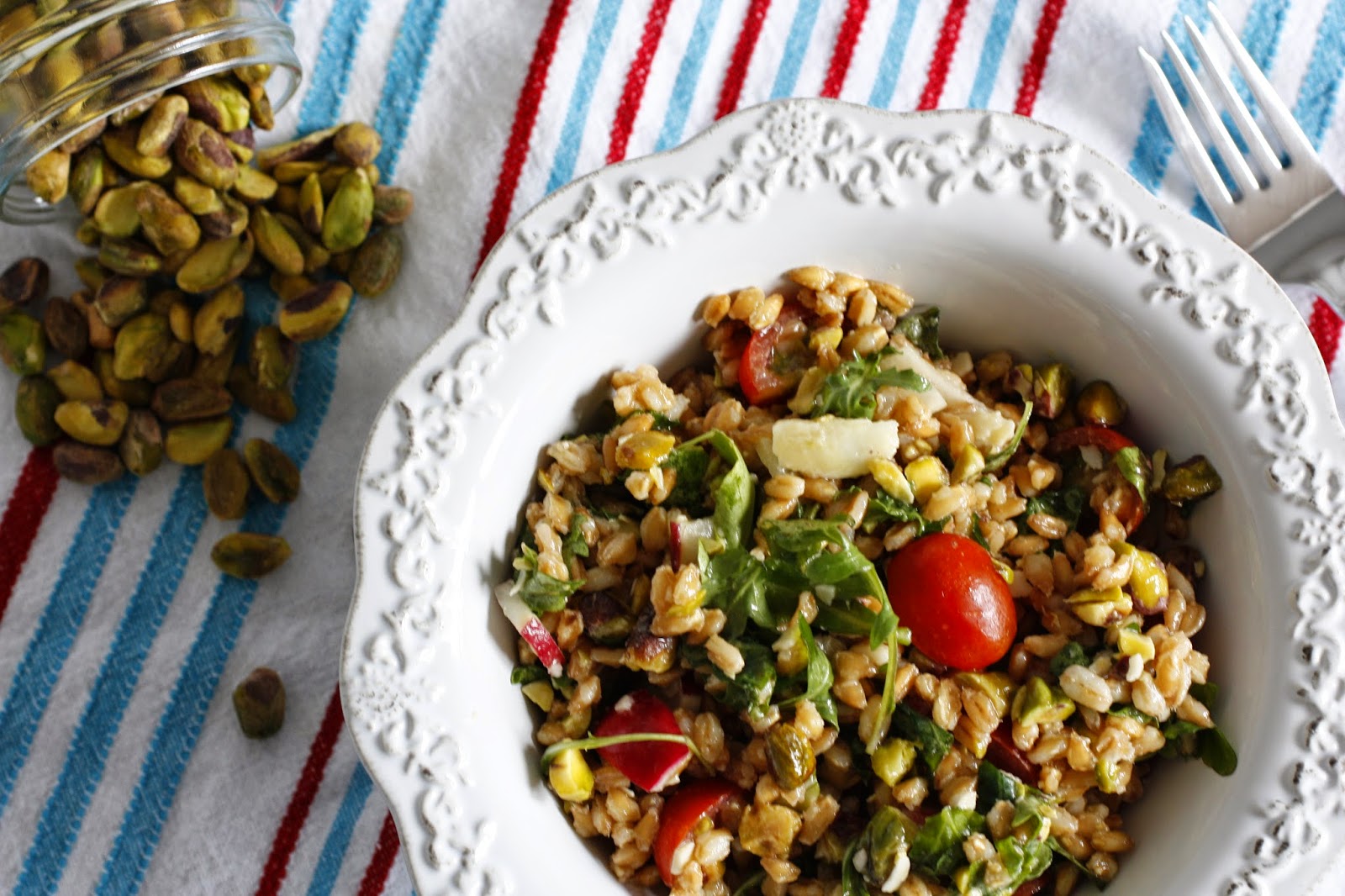 Last spring, my friend Kate and I went to check out the new Soho hot spot Charlie Bird. We ordered a veritable feast of veggies, toasts, and pastas, and while everything was delicious, I don't remember the vast majority of it (and that's not due to the feast of cocktails that was also ordered).  It's just that the first thing that appeared on our table, a sweet, salty farro salad studded with nuts, cheese and herbs, was so overwhelmingly good that I have a hard time recalling anything else about the meal. Apparently I wasn't the only one totally smitten with this salad, because shortly before our visit, the recipe appeared in the Dining section of the New York Times. I made it for dinner recently and it was just as good as I remembered. In addition to pistachios and Parmesan, the salad is loaded with radishes, tiny tomatoes, peppery arugula and fresh herbs, making it an ideal vehicle for the summer produce currently flooding the markets (and for making dinner without turning on the oven). 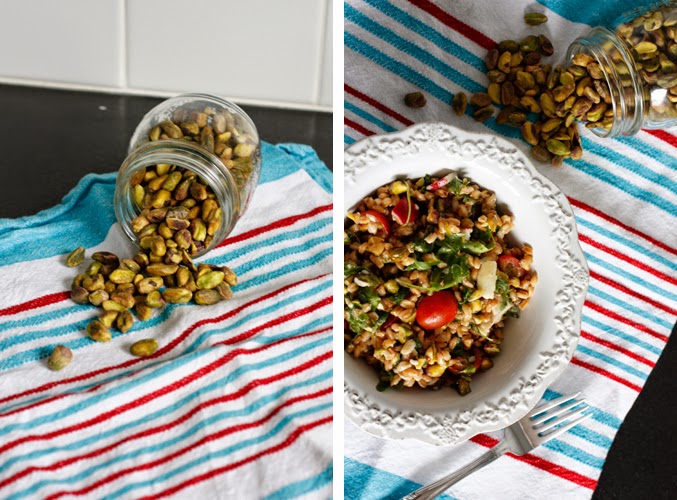 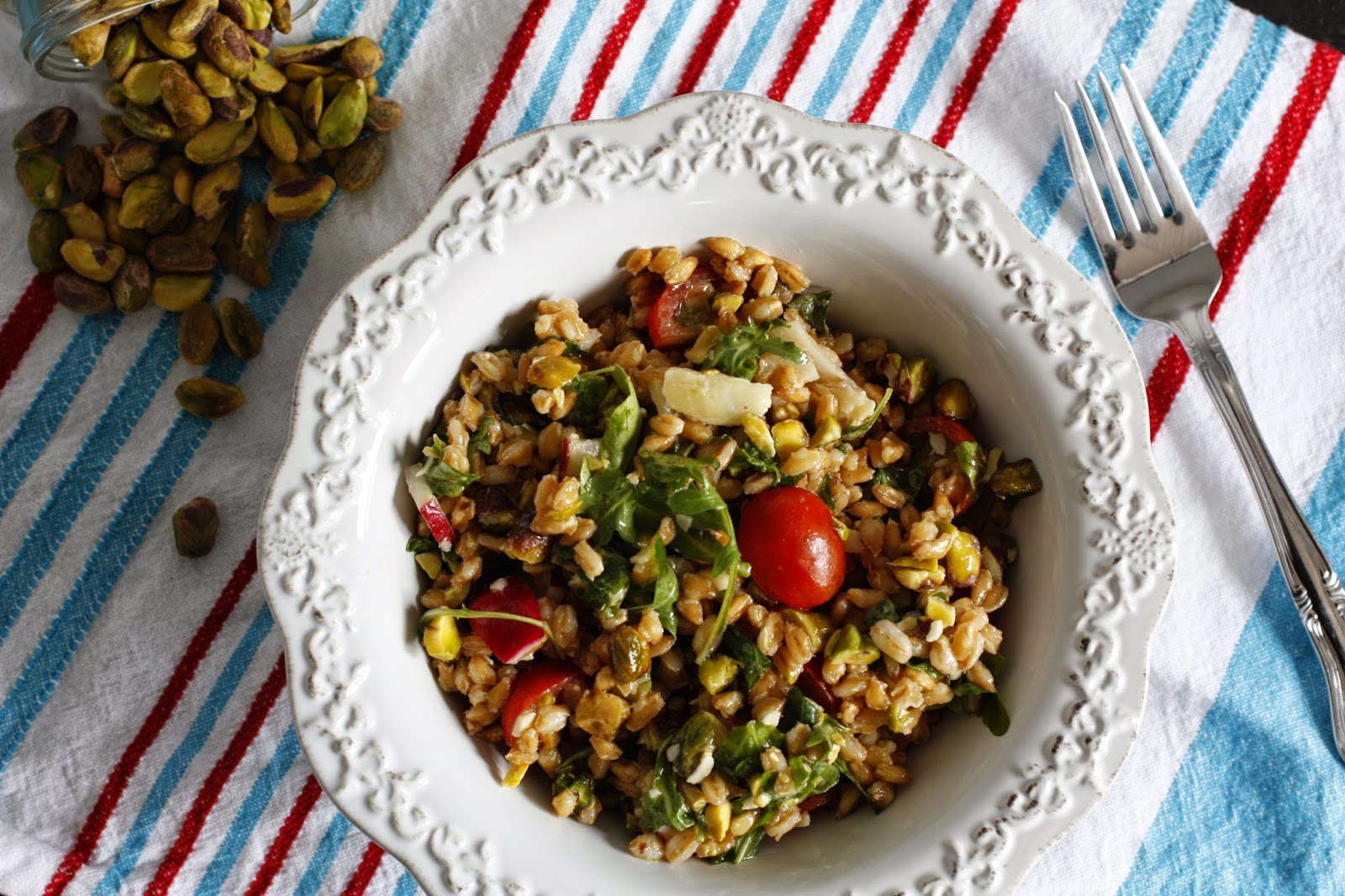 Speaking of herbs, pictured above is my latest obsession--tiny potted plants procured from the Union Square Greenmarket. Longtime readers know that I'm incapable of keeping a plant alive for more than a few weeks, but at only a few dollars, these aren't much more expensive than buying cut herbs at the grocery store, plus they do double duty as kitchen-brightening decor. Add in the fact that they make me smile ever time I catch a glimpse of them on the kitchen window sill, and they're practically a bargain, even if they do only last a few days. Either way they outlived the farro salad--I gobbled up the leftovers straight from the refrigerator the very next day. Now that's the sign of a good salad.

Note: the original recipe called for 2 teaspoons of salt, but since I used a particularly salty Parmesan, I thought it was a bit too much. You can add salt to your finished salad if necessary.


Combine the farro, apple cider, salt, bay leaves, and 2 cups water in a saucepan. Simmer for around 30 minutes, until farro is tender and the liquid is evaporated. (If the liquid evaporates before the farro is done, add a little more water). Discard the bay leaves and let the farro cool.

Whisk the lemon juice, olive oil and a pinch of salt in a bowl. Add the farro, cheese and nuts. (The salad will keep assembled up to this point for 4 hours at room temperature or overnight in the refrigerator.) Just before serving, fold in the arugula, herbs, tomatoes and radishes. Sprinkle with salt if desired.
Posted by Rachel at 5:59 PM

This salad was definitely the highlight of our meal. I also remember the killer playlist!