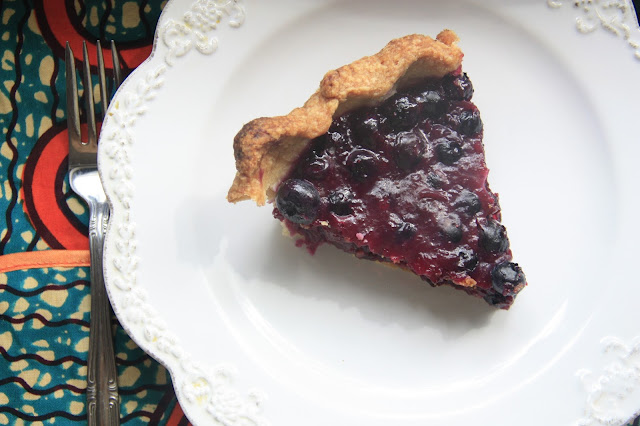 Growing up, things were pretty healthy around our house. The salads were leafy and green, the bread was always whole wheat, and even the fruit rolls ups were all-natural fruit "leather." But one fateful July evening, my mother pulled a fresh blueberry pie out of the refrigerator, placed it in the center of our table, and cut us each a giant slice in lieu of dinner. Ever since, I've considered blueberry pie the quintessential summer dessert, and for me, it's not really summer until I've tasted my first bite. Last week I had my chance, though this time I did have dinner first (this salmon and these brussels sprouts--both highly recommended). I made my favorite no-fail pie crust, and instead of a dense sweet filling, suspended ripe blueberries in a quick jam so that the fresh fruit flavors could shine through. (Did that sound convincing? It was really because it was so hot in my apartment I couldn't stand the thought of leaving the oven on another minute, let alone laboring over a lattice layer.) The result was a sweet, tangy pie that tasted like pure summer. And though I may not have skipped dinner in lieu of dessert, I can't say the same for breakfast the next morning.

Roll out your dough on a floured surface, transfer to a 9-inch pie plate and crimp the edges. Cover it loosely and refrigerate for about an hour. Preheat the oven to 425.  Line the pastry with parchment paper, cut it to fit the pie plate, and fill with rice or dried beans to weigh it down. Bake for 20-25 minutes, then carefully remove the parchment and beans. Prick the bottom and sides of the crust with a fork, and bake for another 10 minutes until golden brown. Let the crust cool before filling.

Bring 1 cup of blueberries and 1/2 cup water to a boil in a medium saucepan. Meanwhile, combine the cornstarch and remaining 2 tablespoons of water in a small bowl.  When the blueberries come to a boil, reduce the heat to a simmer and cook, stirring constantly, for 3-4 minutes, until the blueberries burst and the juices begin to thicken. Add the cornstarch and water mixture, and the sugar, lemon juice and salt while stirring constantly. Cook for 1 minute, until the filling becomes translucent. Remove from the heat, and immediately fold in the remaining blueberries. Pour the filling into the crust, and let the pie set for 2 hours before serving.
Posted by Rachel at 10:38 PM

The filling looks so jammy and fruity, yum!