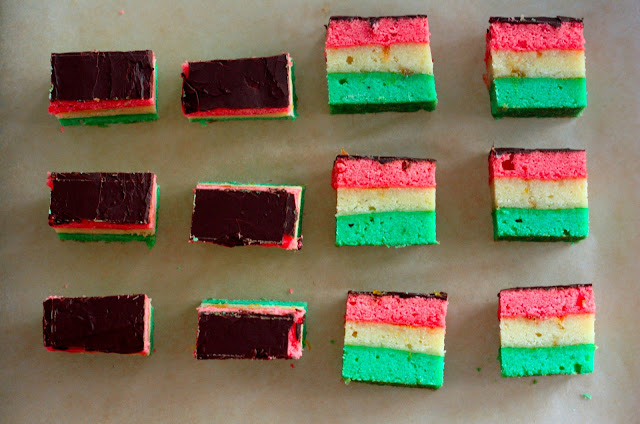 As a general rule, I'm an optimist. A night owl. A wine drinker. And a cookie minimalist. You can keep your fancy fillings and fussy frostings, your royal icing and your rainbow sprinkles. Just leave me with a heaping cup of chocolate chips and a generous pinch of sea salt and I'm more than content. But there are exceptions to every rule. Screen a slasher flick and I turn into a passionate pessimist. Hit me with a bout of jetlag and I'll fall fast asleep in my dinner. Bring me to a baseball game, and it's all about the beer. And as for the exception to my cookie rule, well, allow me to introduce you to the rainbow cookie. Colorful layers of aromatic almond sponge cake are alternated with apricot preserves and dark chocolate to create a cookie that's as flavorful as it is fancy. Some rules were made to be broken. 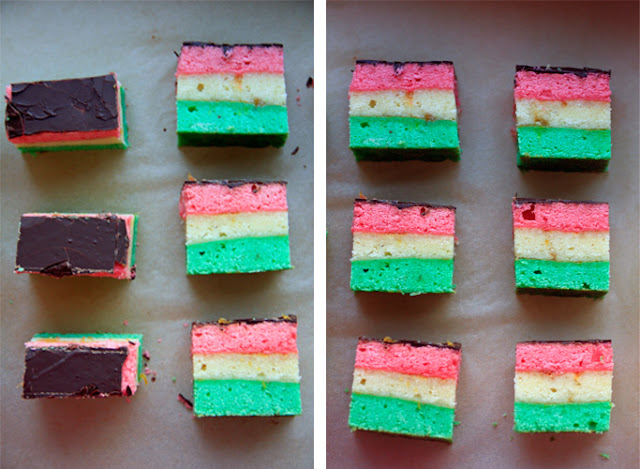 Preheat the oven to 350 and line 3 9x13 pans with foil leaving an overhang, and grease the foil with 2 tablespoons of butter. Beat the egg whites in the bowl of a stand mixer fitted with the whisk attachment until soft peaks form. Add 1/3 cup sugar and beat until stiff peaks form. Transfer to a bowl, cover and put in the refrigerator to cool.

Put the almond paste and sugar in the bowl of a stand mixer and beat with the paddle attachment until combined, about 4-5 minutes. Add the remaining butter and beat until fluffy. Mix in the egg yolks and then the flour and salt. Fold in the whites in two additions.

Divide the batter evenly between three bowls. Add red food coloring to one, green to another, and leave the third one plain. Spread each bowl of batter into one of the prepared pans. Bake for 9-11 minutes, until just set. Let the cakes cool in the pans.

Remove the cans, top pan and foil and transfer the cake to a wax-paper lined baking sheet. Spread half of the melted chocolate evenly over the top of the red layer using an offset spatula. Place in the freezer for 10 minutes, until chocolate is set. Cover the cake with waxed paper, invert a baking sheet on the top, and flip the cake over. Cover the bottom of the green layer (now the top of the cake) with the remaining chocolate and freeze another 10 minutes, until set. Cut the cake into six even strips. Cut each strip into 12 cookies. Store in an airtight container.

Recipe Notes; I halved the recipe and baked each layer in a 9-inch round cake pan. I used Sarabeth's apricot orange marmalade between the layers, and topped one end of my cake only with chocolate--I used Guittard semi-sweet chips. Resist the temptation to use more chocolate than the recipe calls for--if your chocolate layer is too thick it will crack when you try to slice the cookies.
Posted by Rachel at 11:03 PM

I wished I lived/worked closer to you so I could pop in for these - they look so yum!

I can't get over these - they are SO cool! Really, really impressive.

PS We are in the midst of a Parenthood marathon over here.