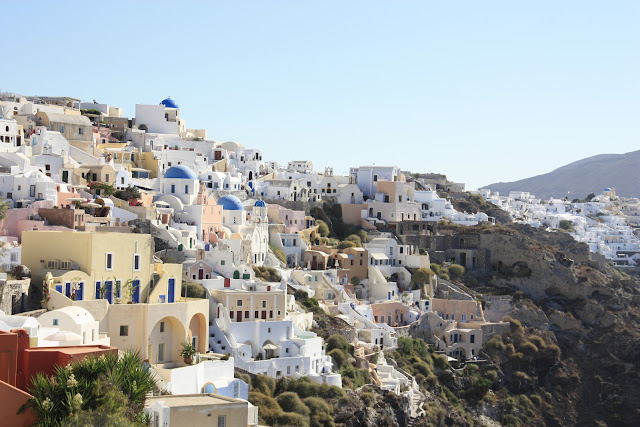 By the time I landed back in Athens after my week at cooking school, I had exactly 48 hours before I had to board my return flight to the United States. The practical thing to do would have been to stay put in Athens, seeing as my flight to New York departed from the very same airport where I'd just arrived. But I didn't fly halfway around the world by myself to be practical. So instead, I impulsively hopped on an Aegean Airlines flight to Santorini. Shortly after wheels up, I started to second guess my decision. Not only was my detour going to be expensive, but my tight timeline meant that if my flight from Santorini back to Athens was even the slightest bit delayed, I'd miss my connection to New York. Besides, wasn't Santorini pretty much the Disneyland of honeymoon destinations? It would probably be packed with cheesy commemorative key chains and couples slurping on different ends of the same spaghetti noodle. As soon as I got my first glimpse of the island's coastline, I realized that even if all of my fears came true, going to Santorini could never, ever, ever be a bad decision. Just look at it. 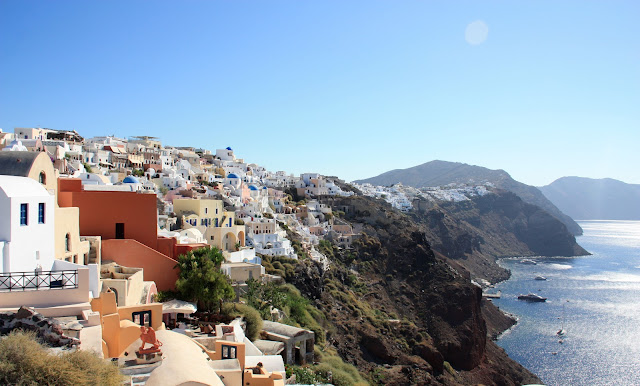 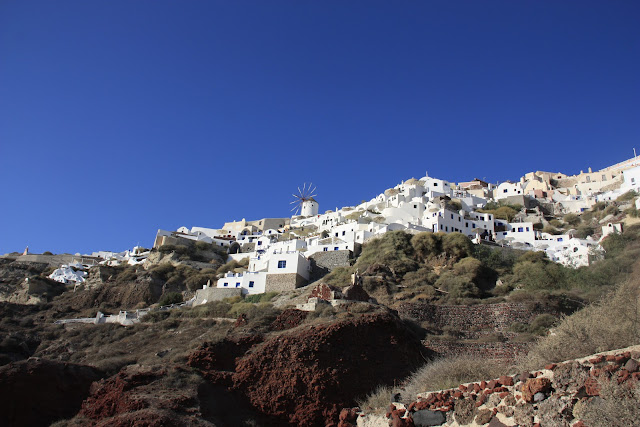 As it turned out, my two days in Santorini were like something out of a movie. The island was unfathomably beautiful, and I was seemingly graced with one stroke of good luck after another. The hotel that I'd hastily booked online turned out to be one of my favorite places I've ever stayed--anywhere. Esperas Traditional Houses in Oia is a classic island-style cave hotel, meaning that each room is built into the side of the cliff. All have stunning ocean views in addition to private balconies. True, I had to walk down a lot of stairs to get to my room, but stairs don't feel like a chore when they literally lead down a cliff towards the ocean. By the time I arrived at the hotel there were only a couple hours of daylight left, so my first order of business was to hike down to Amoudi Bay, a popular place to stroll along the water, linger at a cafe, and view the sunset. 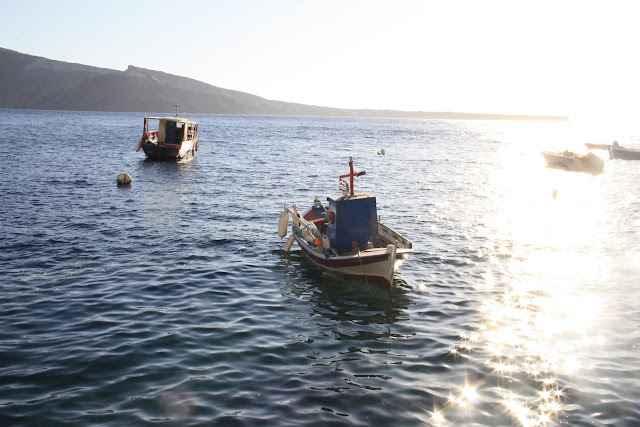 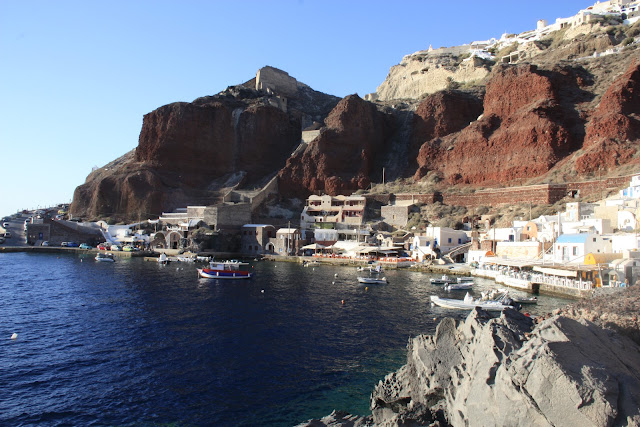 No joke, this is what I woke up to the next morning: 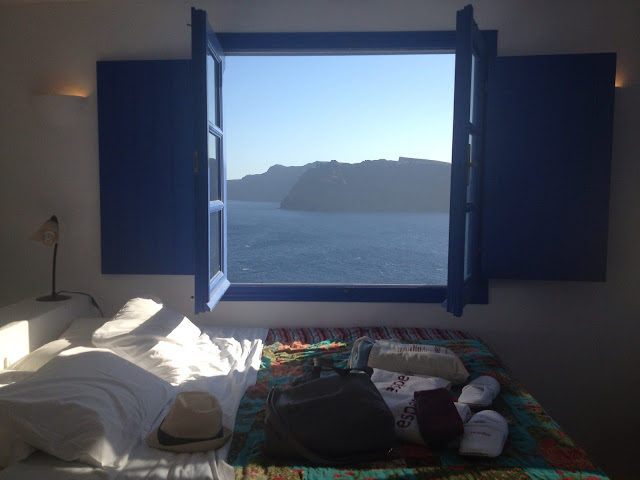 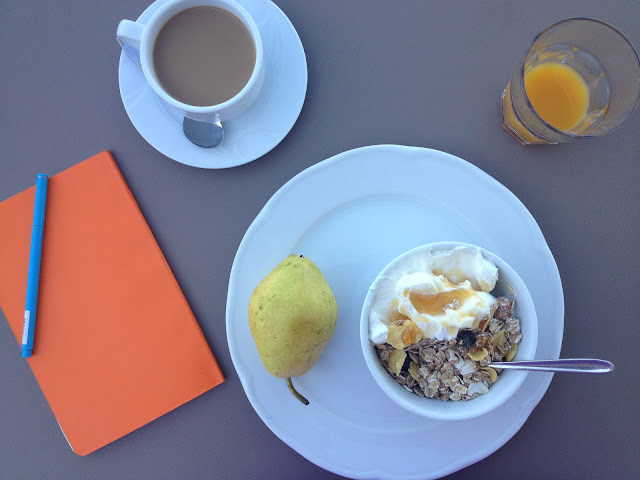 I spent the day pounding the pavement, trying to pack as much as possible into my limited time in Santorini. Mostly, this involved wandering though the back alleys of Oia, getting lost and falling in love with  its quaint charm. 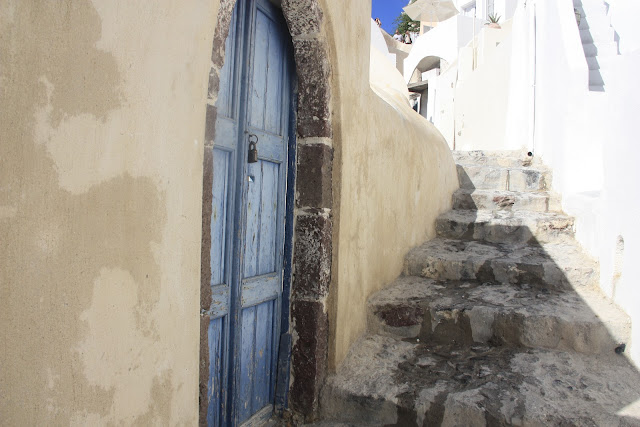 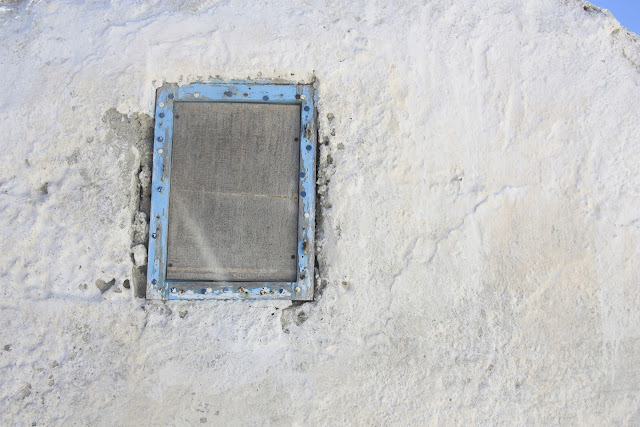 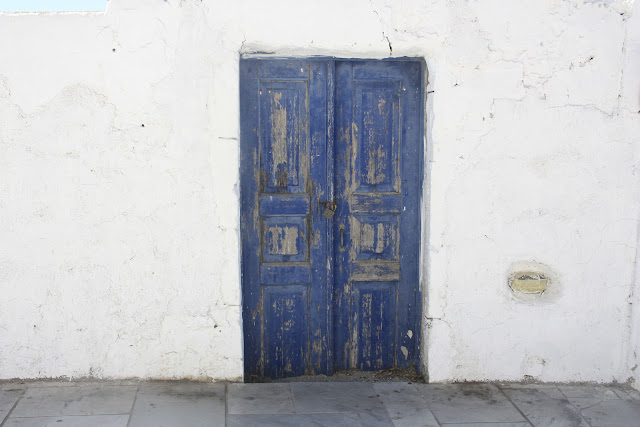 But I also hiked part of the road to Fira, stopped in a cafe after being seduced by the cheese pastries in its window, chatted with a jewelry maker about her own solo travels, discovered that the couple staying in the room below mine lived only 15 minutes from where I grew up in Minnesota, and walked down a windy dirt road behind my hotel only to find that it ended at a nearly deserted black sand beach. 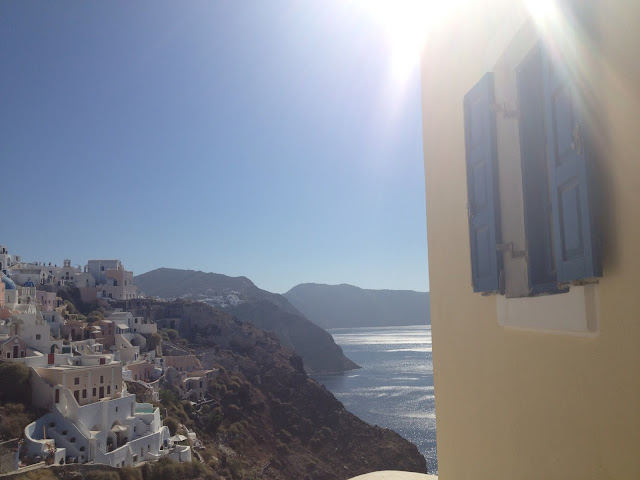 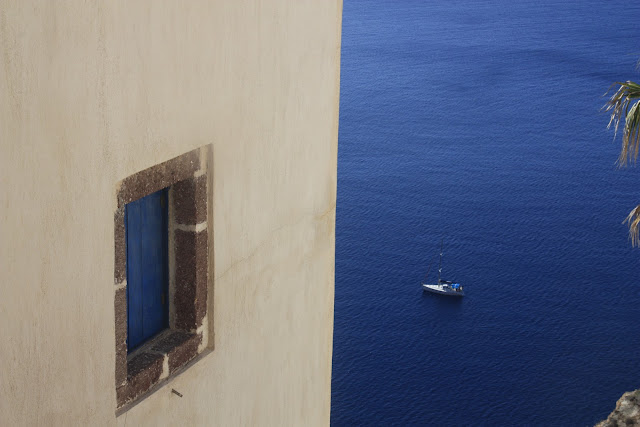 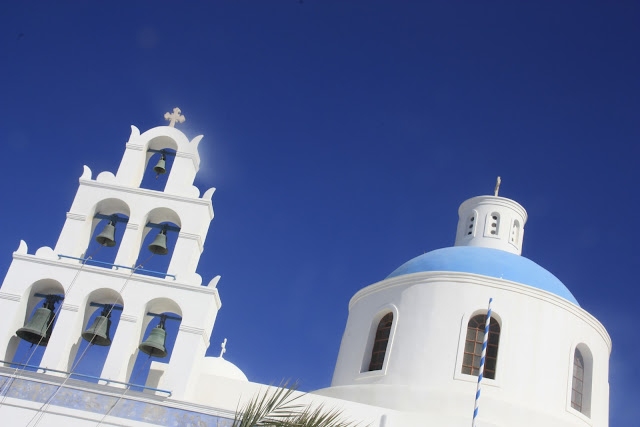 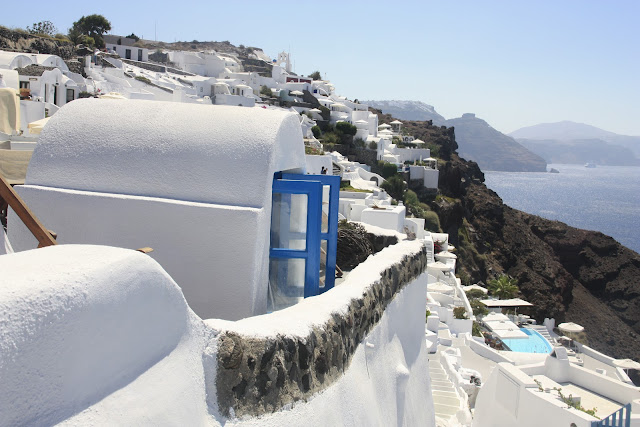 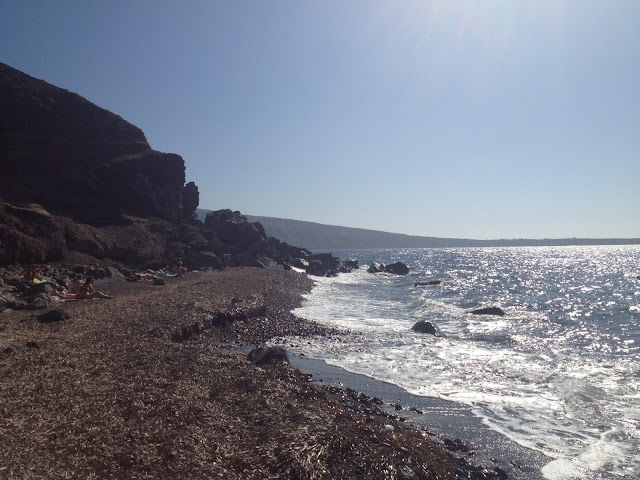 In other words, it was pretty much the best day ever. As I sat out on my balcony on my last night, sipping my complementary wine, chatting with my neighbors, and enjoying the most stunning sunset I've ever seen, I was positively giddy with my good fortune. Lesson learned: Santorini is never a bad decision. 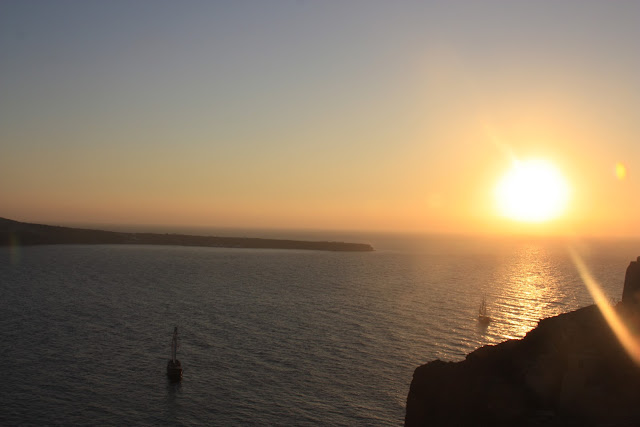 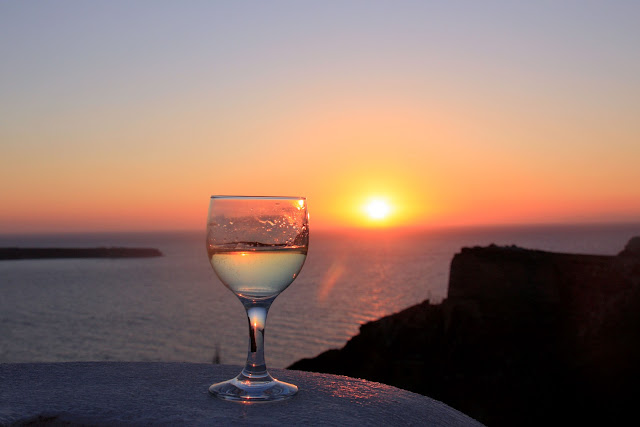 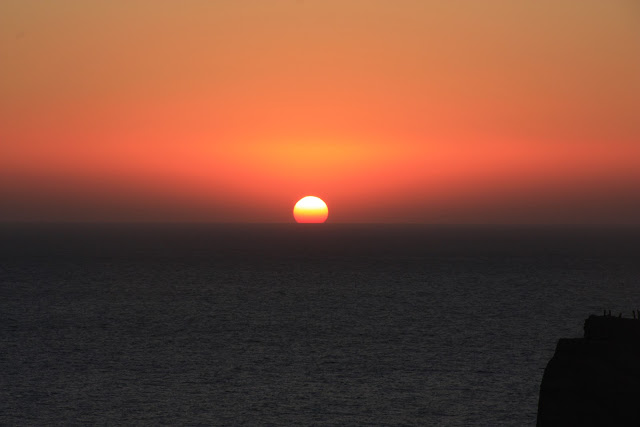 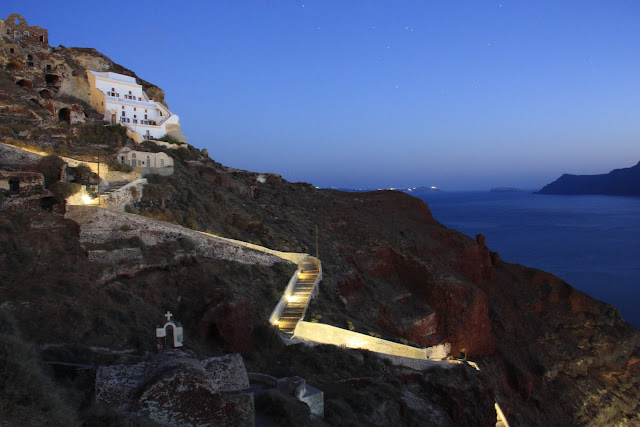 If you go: Flights depart from Athens multiple times a day. I stayed at Esperas Traditional Houses in Oia, which I highly recommend. The rooms are very clean, the staff is super friendly, and the location can't be beat--tourists travel from all parts of the island to watch the sunset at a point that was literally mere yards from my room's balcony. The only drawbacks are the stairs, which might be difficult for young children or those with limited mobility, and since the hotel is above the Bay of Amoudi, you can also occasionally hear (and smell) the donkeys that take people to and from the port. Personally, I wasn't bothered by either.
Posted by Rachel at 12:19 PM