{wanderlust} a day in athens 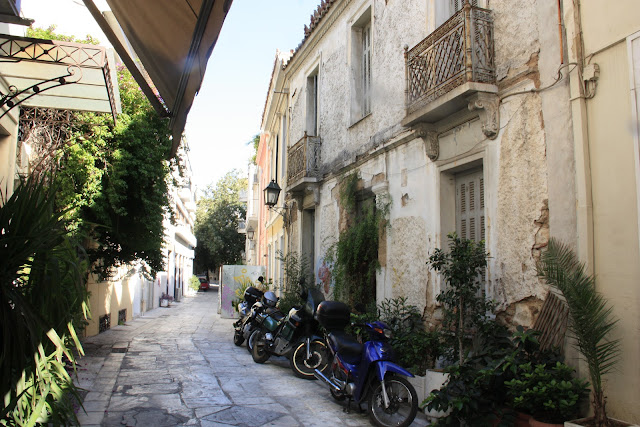 Before my trip to Greece, I had never traveled alone. There was the time I went to Israel solo after a certain brother of mine backed out of the Birthright trip we'd signed up for (you know who you are), and the week I spent at surf camp in Costa Rica a couple of years back, but that was different.  Those trips were scheduled, they were organized, and they came with built in companions in the form of my fellow travelers. Until I arrived in Athens, I'd never shown up in a foreign city, all by myself with no plans, no friends, and no schedule. I booked my trip on a whim, and spent so much time telling people "I'm going to Greece! For two weeks! By myself!" with a perma-smile plastered across my face that I had no time to consider that it could be anything other than fabulous. But somewhere over the Atlantic ocean, I started to panic. I was going to Greece. For two weeks. By myself. What if it was awful? What if I was lonely? What if this trip was a huge mistake? I landed in Athens, took a taxi to my hotel, and climbed up the spiral staircase to the roof. I ordered a glass of white wine, headed out onto the terrace, and this is what I saw: 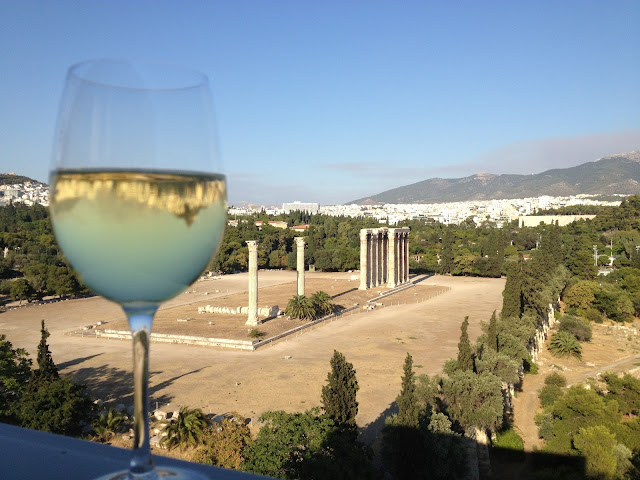 Panic over. Crisis averted. Mind at ease. I was in a foreign country. For two weeks. By myself. And it was amazing. Here's a look at what I did during my first stop--Athens.

Athens Walking Tours: My first morning in Athens, I signed up for the Acropolis and City Tour. We saw the changing of the guards, the National Gardens, the Temple of Zeus, and the Acropolis. I also met some interesting travelers along the way. I thought this was a great way to get my bearings in Athens, and to  efficiently cross some historical sites off the list.

Tzitzikas kai Mermigkas: After my walking tour, I was ready for lunch. I went to this cafe recommended by my guidebook for one of the most delicious Greek salads I had on my trip, as well as tomatoes stuffed with rice and herbs. It was wonderful. And I'm not just saying that because my waiter thought I was Greek. Or because he brought me a free drink.

Benaki Museum: In the afternoon, I headed to the Benaki Museum, a former home and private collection now open to the public where I saw Greek art from ancient times to the present.

Clemente VIII:  Next it was time to caffeinate, so I stopped for a freddo, which is the Greek version of the frappuccino. On the islands, they make frappes with instant coffee and sweetened condensed milk. Clemente VIII boasts a fancier version made with espresso. My almond freddo was way too sweet for me, but it would have been delicious had I known to order it light on the sugar.

Kuzina: The last stop on my day in Athens was Kuzina, where I had dinner (feta mousse fritters and slow roasted pork with lime basil cream and an apple cucumber salad) and admired the view (the Acropolis lit up at night). Both were delicious.

The Athens Gate Hotel: In Athens, I wanted a hotel that was clean, safe, and centrally located. I was also hoping to save a bit here so that I could splurge later in Santorini. The Athens Gate Hotel fit the bill. My room was small and the view was into another building across the way, but it was clean, the staff was friendly, and there was a lovely rooftop terrace (pictured above) where I enjoyed breakfast in the morning, and a glass of wine in the evening. For something slightly more upscale, I've heard good things about The New Hotel.

Stay tuned for dispatches from the other destinations on my Greek adventure, as well as plenty of recipes (yes, I too remember when this used to be a baking blog....Sweets coming up soon. I promise.)
Posted by Rachel at 12:36 AM

Its great experience for share this blog for your Athens tour. Thanks for it. Keep it up.