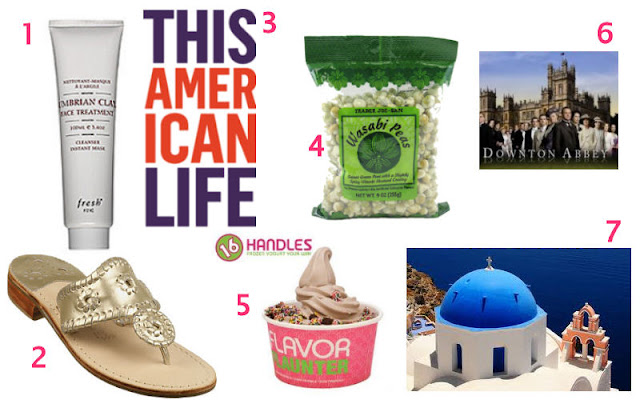 Things got a bit crazy around here last month and I forgot to post my July favorites, but I'm back in action with a list of things I'm smitten with this summer. As a reminder, nothing in these posts is sponsored, and I never use affiliate links. These are just a few things I've been loving lately that I think you might like too.


1) Fresh Umbrian Clay Face Treatment: I've had a tube of this in my medicine cabinet for quite a while, but it wasn't until I ran out of face wash and began using it as a cleaner instead of a mask that my love for it really blossomed. My skin has been clear and bright of late, and I think I have this treatment to thank.

2) Jack Rogers: These have been a summer must-have of mine for several seasons, but after forgetting my rainbow flip-flops at a recent wedding, they have literally been glued to my feet for the past two months. Comfortable and cute, sometimes they're the only non-workout shoes I pack for a summer weekend away.

3) This American Life: I know I'm pretty much the last person on the planet to become obsessed with the genius that is This American Life, but I'm making up for being tardy to the party by racing through the archives at lightening speed. From families reunited after political crisis, to modern day couples surviving a break-up; from family Thanksgivings gone hilariously wrong to unearthing the secret formula for Coca-Cola, I listen with rapt attention to whatever story Ira Glass is telling. I follow along via the ap on my phone, and also subscribe to the podcast. If you like amazing stories of everyday life, I suggest you do the same.

4) Wasabi Peas: My new favorite office snack. I'm not sure they're exactly healthy, but the only thing more satisfying than popping one after another of these into my mouth would be doing the same with m&ms, and they've got to be better for me than that. I also love the sweet and sour trail mix they sell at Whole Foods, which blends wasabi peas with almonds, Spanish peanuts and dried cranberries.

5) Sixteen Handles: I always go a bit ice cream crazy come summertime, but lately I've really been taking it to the next level. I now live way too near to one of those shops where you can dispense your own frozen yogurt and pile on the do-it-yourself toppings.  Half peanut butter and half salted caramel with a dot of vanilla and fresh strawberries? Don't mind if I do.

6) Downton Abbey: I don't think I've been this obsessed with a TV show since Friday Night Lights (Texas Forever!) I just downloaded the second season, which I'm planing to watch on the plane ride to Greece.

7) Greece: You heard me. I'll be watching Downton Abbey on the plane ride to Greece! By the time you read this, I will be on a remote Greek island immersed in a week of Mediterranean cooking classes, among other adventures. Plenty of stories, recipes and photographs to come upon my return.
Posted by Rachel at 5:57 PM