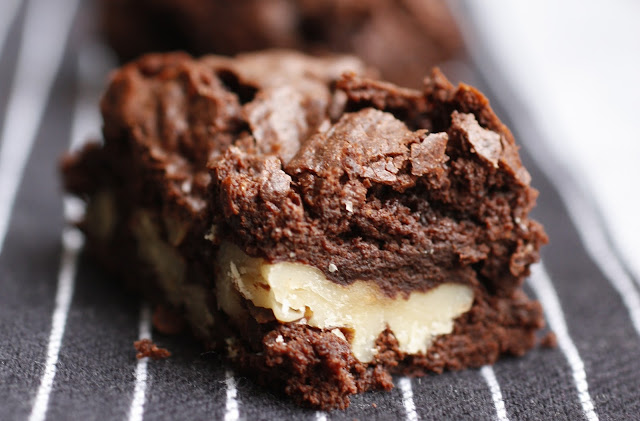 I haven't been baking much lately. Don't worry--I haven't sworn off sugar or banished butter or made a resolution to go raw (file under: never going to happen). It's not anything that serious. The unfortunate truth is that aside from working, I haven't been doing much of anything lately. After six months at Legal Services and a nice long vacation, I'm back at the firm. And not only am I back, but I'm on a team that's preparing for trial. Which is extremely exciting--but it also means that instead of chopping chocolate and grazing through the greenmarket, I'm spending my evenings and weekends dining al desk.
But when February's Bon Appetit arrived in the mail, I knew the second I saw the cover recipe that I had to make these brownies. Browned butter and chocolate in one recipe? I may barely have time to wash my hair, let alone a sink full of dishes, but I haven't completely lost my priories. So last Saturday when I found myself with a few spare hours I replenished my baking supplies and got to work. Luckily, besides the actual browning of the butter (which, if I'm being honest, usually takes me two tries to get right) these were super simple and only used one bowl. I added the rest of the ingredients to the hot butter, poured the batter into a pan, and popped it in the oven. Twenty five minutes later, I had a batch of amazingly rich and fudgy brownies on my hands. And they were spectacular. My only gripe about this recipe is the walnuts, which I felt overwhelmed the chocolate flavor. Next time, I would reduce the amount of nuts, or leave them out entirely. Nonetheless, they were truly delicious. As in, my trial team ate them for breakfast delicious. Like I said, priorities.
Cocoa Brownies with Browned Butter and Walnuts
Recipe from Bon Appetit, February 2010 and available here
Posted by Rachel at 7:00 AM

I will have to make these this evening, browned butter, chocolate and ONE mixing "bowl" (the pan in which the butter is browned!) Wow. I'm a "girl brownie" kinda' gal anyway, so I'll just leave out the nuts. ;-)

Ohhhhhhh my! This looks so amazing. Yum!!

Great blog; happy I found you!