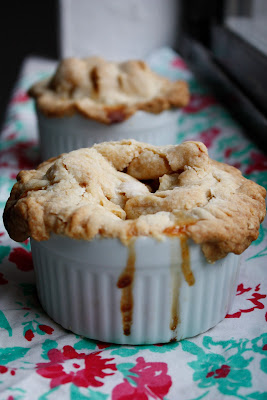 Confessions of a baking blogger: I've never made a proper double crusted pie before.  I know. It's downright disgraceful. You should probably all storm my house and confiscate my pastry tools.  But pie has always seemed so troublesome and so labor intensive.  (If I'm going to put that much effort into anything, it had better involve chocolate).  Besides, as a single, twenty-something New Yorker, there aren't many occasions in my daily life that seem well suited to a pie. Fancifully flavored ice creams? Sure.  Alcohol infused cupcakes? You betcha. But an entire pie just never seemed to fit the bill.  Until last Sunday night, when I got an email about a Baking Emergency (you know I've waiting pretty much my entire life for a Baking Emergency, right?) The email explained that our office was hosting a last minute potluck the next day in honor of a paralegal's twenty-fifth anniversary.  An office potluck in Brooklyn?  Sounds perfectly pie-appropriate to me. So I rolled up my sleeves, pulled out Baking From My Home to Yours and got to work on this week's Tuesdays With Dorie pick, All American All Delicious Apple Pie, chosen by Emily of Sandmuffin. 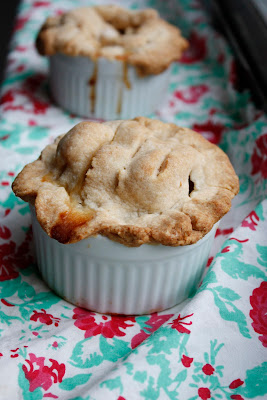 A couple of hours later, I stood surveying my kitchen.  There was quite nearly nothing that wasn't dusted in a thin layer of snow white flour. But I had done it--I had made a pie.  The only tricky part was rolling out the dough, and I found that even that was manageable with a little practice and a whole lot of flour (hence the kitchen white out). Other than that, I was shocked at how easy it was.  But not nearly as shocked as I was when I arrived at the office on Monday morning and discovered that the potluck was actually the following week.  That's right--I was an entire week early.  Never fear--my buttery, flaky pie was consumed by my team at our weekly Monday meeting.  Not what I would normally consider a pie-worthy event, but it made Monday much more delicious.  So much more delicious that I whipped up these mini versions for dessert last night.  If there is a pie-appropriate event in your future or if you just want to add a little sweetness to an otherwise ho-hum weekday, you can find the recipe here.
Posted by Rachel at 8:43 PM

they look wonderful to me! "real double crusted" or not :) xoxo Tia @ Buttercreambarbie

I love these, so cute! I love your table cloth too!

I like a personal apple pie! Yours looked soooo very good!!!! Makes me want to bake some too!

I love making pie, but I haven't wanted to make a big apple pie again this fall, since my mom will have one at Thanksgiving.

These, on the other hand, would be perfect!

great job! i love your mini's. i still haven't mastered the pie crust yet *sigh*