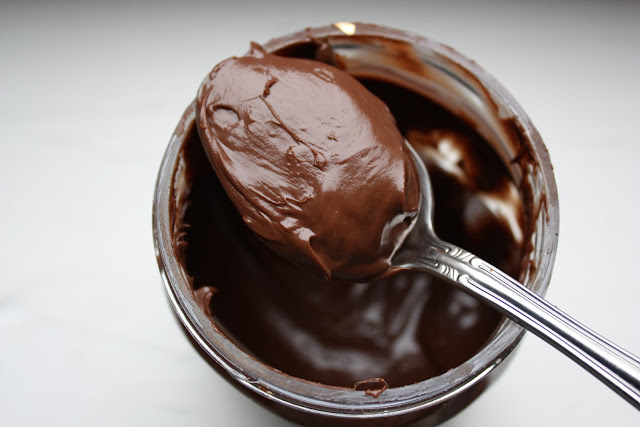 Hello my name is Rachel, and I'm a Nutella-holic.
It all started last week over brunch at Le Pain Quotidien. If you've ever been to Le Pain, you know that their bread arrives at your table accompanied by a trio of spreads. One is raspberry jam, and I think another is apricot preserves, but it really doesn't matter because those two are just there to provide backup to the real star of the show: Le Brunette, Le Pain's own hazelnut spread. Hazelnut spread is one of the few foods that I avoid altogether, after learning during a semester spent in Switzerland that I lose any and all self control when presented with a jar of Nutella. Before last weekend, it had been years since a single taste of the stuff had passed across my lips. But on this particular morning, I had just come from an excruciatingly difficult exercise class (the kind packed with lithe, Lululemon clad girls and an instructor who wears a headset and chants "squat lower" to the beat of the latest Lady Gaga tune) and I was feeling especially virtuous. "What the heck," I thought. "I'll just have a little bit." 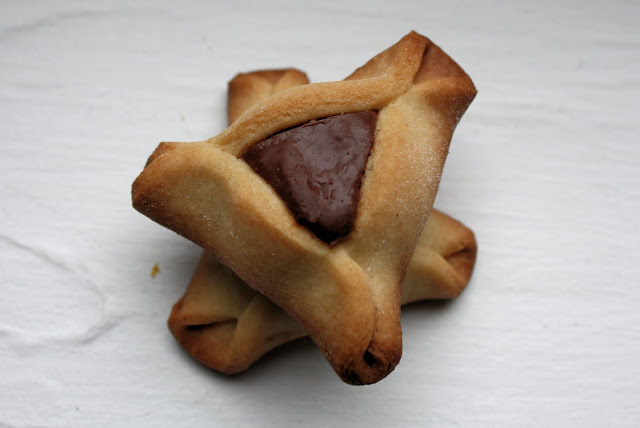 I think you can guess where this is going. I slathered that hazelnut spread over every last inch of my baguette. And when I was finished? I flagged down our waiter...and ordered a second one. Yes, I was off the wagon, big time. You'd think that after such a performance, my resolve would be strengthened. That I would have immediately sworn off Nutella for another ten years, called my friends and family to warn them of my budding addiction and put advertisements up in my local grocery store urging patrons to call security should they see me attempting to purchase a jar. Instead? Well like any lapsed addict, I couldn't stop thinking about where I was going to get my next fix. And I knew just the place. 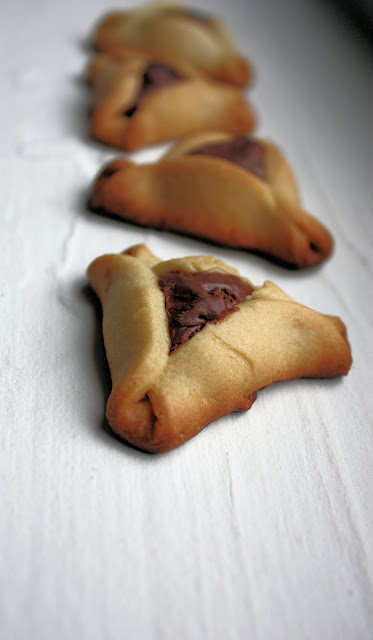 Earlier that week, the LA Times ran a recipe for Hamantaschen, the triangular Purim cookie, but filled with Nutella instead of the traditional fruit. Needless to say, my plans for the rest of the afternoon were quickly cast aside. I stopped at my neighborhood bodega for a jar of Nutella on the way home from brunch and set to work baking these cookies. Not only were they much simpler to assemble than they look, but they were absolutely and positively delicious. The sweet, mild cookie shell provided the perfect setting for the nutty, chocolaty center. And while I know that Purim has passed, I think that these would make a great treat any time of year. The only problem? I still have half a jar of Nutella left in my cupboard, and I may or may not have eaten three spoonfuls of it since I began typing this post. I see a lot of excruciatingly difficult exercise classes in my future. Because my name is Rachel, I'm a Nutella-holic, and I plan on staying that way. These cookies are just too good to go another ten years without.
Nutella Hamantaschen
Recipe: LA Times
Posted by Rachel at 9:49 PM

Hehehehe. I love good hamentaschen. Not so much a fan of Nutella, though. I don't like hazelnut. I know, blasphemy.

Hi. May I please just reach through the computer and grab that spoon, it looks too heavy with deliciousness. Wow! I <3 Nutella. :)

Love nutella. Really any baked product with Nutella in it or really even hazelnuts is a five star recipe in my book!

I only ate 10 of these Saturday night, I'm surprised you had any left to photograph.

They look, and are, wonderful!

I recently posted about hamantaschen myself and wanted to fill them with nutella as well! Of course I couldn't at the end cause I ate it all before I got to filling the cookies....hhm.

The class was really hard and the Le Brunette and extra baguette was well deserved. I mean you helped me justify my extra brioche