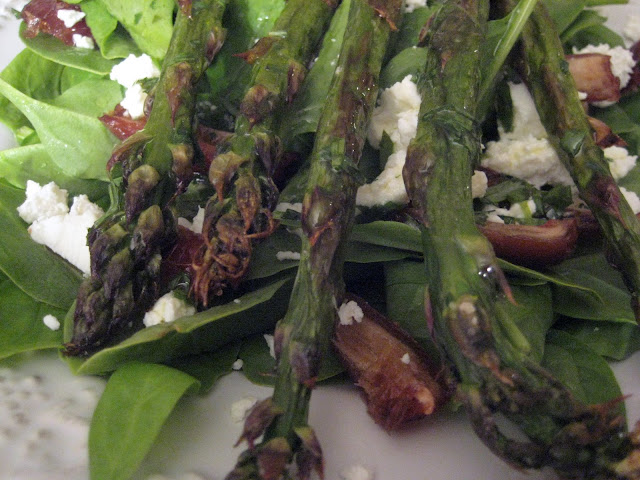 It took two phone calls to time warner, five texts to my brother, one tantrum worthy of an angry four year old and a very large glass of wine, but I finally managed to get my cable and internet working simultaneously. Oh the joys of moving.

And after all of that, what did I want to eat for dinner? My only requirement was that it be something I could make in ten minutes or less with ingredients that were already in my kitchen. So what did I have on hand? A few spears of asparagus, a hunk of goat cheese and some tarragon left over from Smitten Kitchen's Asparagus, Goat Cheese and Lemon Pasta, some baby spinach that had been served with this Sweet Potato Falafel, and a few containers of dried fruit and nuts. In short, the makings of a great early summer salad. I started by tossing the asparagus with a bit of olive oil and salt before popping it under the broiler. Next, I crumbled the goat cheese over the baby spinach, and, inspired by Kristin's recent pairing, added some chopped dates. Finally, I whipped up a batch of Giada's Tarragon Vinaigrette to top it all off. It was quick, delicious, and best of all, minimal assembly was required.
Posted by Rachel at 11:10 PM