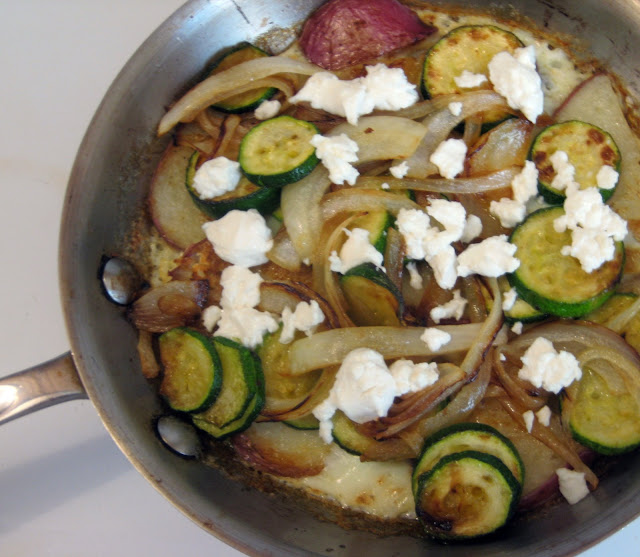 Last year, boyfriend and I accidentally hosted a New Year's Day brunch. I say "accidentally" because we had no plans to do anything of the sort until approximately two am the night before, when, fueled by champagne and revelry, we decided that it would be a good idea to invite several friends to come to boyfriend's apartment a mere ten hours later. Clearly, I needed to make something that was fast and easy. I decided on a fruit salad, croissants we picked up from Patisserie Claude (best croissants in new york--seriously) and a fritatta loaded with potato, onion, zucchini and goat cheese. The fritatta was delicious, and came together quickly and with minimal equipment (always a plus when cooking in boyfriend's tool starved kitchen). I would like to tell you that the fritatta was the highlight of the brunch, but alas, when a friend stopped by Dunkin' Donuts to pick up some coffee, they had just decided to close early and gave him four dozen donuts, a dozen muffins, and two million munchkins to bring back to us. Needless to say, the mountain of donuts stole the show. But the fritatta was a close second, and was definitely the highlight of my lunch when I made it again yesterday. This time, I used egg whites and it made a perfectly healthy and satisfying meal. Though I do wish I had a glazed donut to eat for dessert... 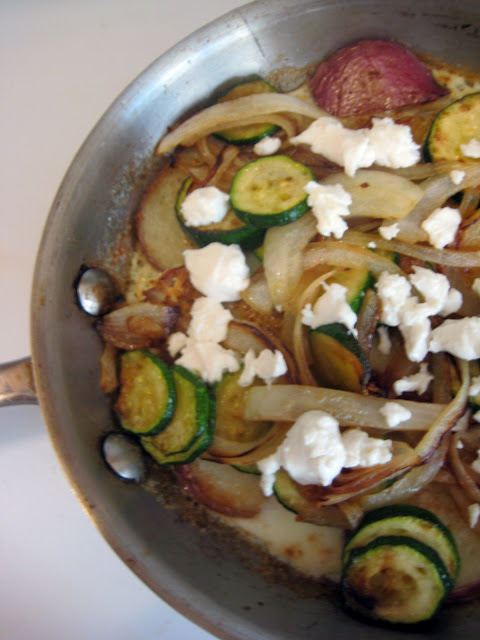 
Preheat oven to 350. Heat 1/2 teaspoon oil in a small saute pan. Add onion and cook until soft and golden, about 10 minutes. Remove onion. Add additional 1/2 teaspoon oil and place potatoes in a single layer in the skillet. Cook about 3 minutes, until soft and browned. Flip and continue cooking on other side for 2-3 minutes. Remove potatoes from pan. Add another 1/2 teaspoon of olive oil to your saute pan and cook zucchini about 4 minutes, until soft. Remove zucchini from pan. Whisk milk into egg whites and heat remaining 1/2 teaspoon olive oil in pan. Add egg whites and cook about 4 minutes, or until just set (as sides begin to cook, lift them up with a spatula to allow uncooked egg to make contact with the pan). Arrange onion, potato and zucchini atop egg whites, and place in the oven. Bake about 8 minutes, or until egg is fully cooked and vegetables are soft and browned. Dot top of fritatta with goat cheese, and bake an additional 2 minutes. Season with salt and pepper and serve.
Nutrition Information: Approximately 355 calories, 14 grams of fat (4.5 grams saturated), 38 g carbohydrates, 6 g fiber, 9 g sugar and 25 g protein per serving.
Posted by Rachel at 5:29 PM

How funny! There is something about DD. I love fritattas, they are so easy to make and so delicious.

I am so tired of trying to think of weekend breakfast ideas... this looks like a good choice!

That sounds so good! I would have gone for the fritatta over the donuts any day. :-)