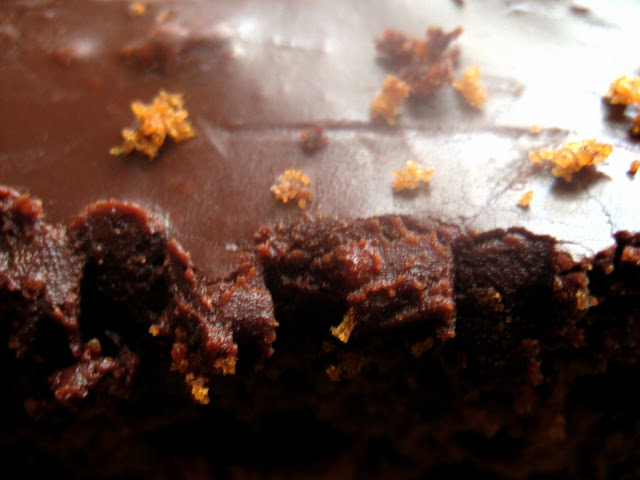 I had high hopes for this cake. Chocolate and ginger are two of my absolute favorite flavors, and I could not wait to get this into my oven. Or into my mouth. In fact, I may or may not have squealed out loud upon seeing that it was Sherry Trifle blogger Heather's choice for this Tuesday. Unfortunately, my excitement was short lived. Because I think that this was my second most disastrous Tuesday with Dorie to date. (Hopefully nothing will ever surpass my biggest disaster ever on record--the infamous caramel sauce that stood up on its own). Things started off auspiciously enough--the batter was divine, and I don't even like batter (Nope, not cookie dough either. I know, I know, I'm a freak--get over it.) The recipe was very straightforward, and soon enough my cake was in the oven. However, when I checked on it after 40 minutes, Dorie's recommended baking time, the center was wobbly and still practically raw, but the edges looked in danger of burning. Undaunted, I continued baking until the middle was set (about another 10 minutes) and then got to work on the glaze, which was also delicious (And yes, I do like straight frosting--I'm not completely insane).The real problems began when I tried to un-mold the cake. It would. not. budge. An inch. I know a losing battle when I see one, so rather than fight with my gingerbread any longer, I decided to apply the glaze while it was still in the pan, and remove it in slices. Here's where things really got dicey. My cake started to crumble. At first just a few rogue crumbs detached themselves from the rest of the cake. But as I continued to slice, it got worse and worse until I ended up with this: 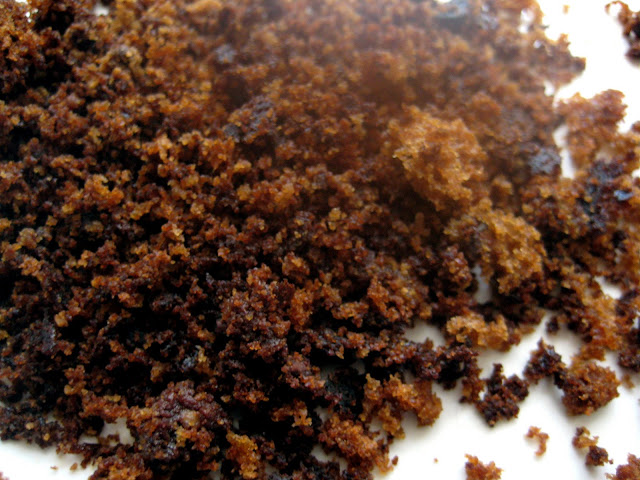 Hmm. Not my most successful effort. Even the slices that made it out of the pan unscathed are a little dry, and I think the ginger flavor could be a little stronger (though I left out the stem ginger in syrup because I coldn't find any). But it seems that other Tuesdays with Dorie bakers had more success with this one, so I may try it again some day. Be sure to check out the Tuesdays with Dorie blogroll for hundreds of other variations!
Posted by Rachel at 5:29 PM

Oh, wow. Too bad it didn't turn out for you. Here's to next week!

Cooking for Comfort by Jennifer said...

It's a shame it didn't work for you -- most of us here loved it. It was really moist and yummy. Next week, though, will be even better, because World Peace cookies are amazing.

Bummer! DId you leave something out by mistake?

When life gives you crumbs, use them as a topping. Looks moist tho. Mine stuck too.

Mine needed a lot of extra time in the oven, too. My oven tends to run a little too cold, so I use an oven thermometer, kick up the temperature, and watch carefully. And yet I still had that wobbly sea in the center of my cake. It turned out well in the end though!