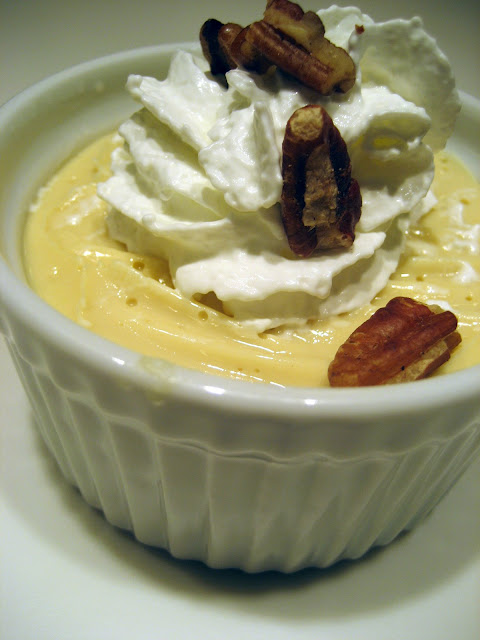 Well hello there. It's been a while, I know, and unfortunately I'm just stopping in. Since you last heard from me, I spent a weekend in the kitchen making edible gifts like hot fudge sauce, cashew brittle, gingerbread biscotti, andes mint cookies and peppermint bark, and a week in Minnesota with my family. But I'm off again tomorrow on an impromptu New Year's ski trip, so I have just enough time to tell you about the Real Butterscotch Pudding I made for this week's Tuesdays with Dorie before I go pack up the new ski pants I bought on sale in the children's section at Paragon Sports (FINALLY an upside to having ridiculously short legs!) and hit the road. (Okay, okay, this recipe was actually for last week's TWD, but I waited to make it on Christmas when my scotch-loving uncle was coming over, so I'm just getting around to posting it now. Better late than never). The pudding was a cinch to make, even though my mom didn't have a food processor (I used a blender instead), and my family gobbled it up. Personally, I thought it was just okay. My pudding came out way too thick and gelatinous, which I'm guessing was the result of a longer than recommended stint in the refrigerator or too much thickening on the stove top. I also found the scotch flavor a little overwhelming, but maybe that was just me because my aforementioned uncle finished his pudding and then polished off the rest of the (mini) bottle of Johnnie Walker. The buttered pecans that went on top were delicious though (and even more so in my oatmeal the next day!) The recipe was chosen by Donna of Spatulas, Corkscrews & Suitcases and is available on her blog. Also, be sure to check out the Tuesdays with Dorie blogroll to see the Tall and Creamy Cheesecake chosen for this week. I will be back next week with some healthy recipes to kick off the new year, as well as the next TWD recipe chosen by (drum roll please) Dorie herself!
Posted by Rachel at 4:59 PM

Thanks for stopping in :P Your pudding looks wonderful, even if you weren't the biggest fan.

We made part of this pudding with a whisk and part with the food processor. The fp made a silkier pudding, we found. Also, adding the scotch at the heating cream stage helped mellow out the scotchy flavor. Glad the family (and esp. the uncle!) liked it.
Nancy

yours looks beautiful! i think i will skip the food processor/blender next time and go for a whisk... even easier ;)
happy new year!

It looks picture perfect with the whipped cream and nuts. Sorry you weren't in love with it.

Your pudding looks beautiful. Have a great ski trip!

Well, it looks good. Mine was a little boozy as well.

Happy new year to you! What a perfect photo...it enhances an already delicious dish. My husband would love this so I better get going on my own.