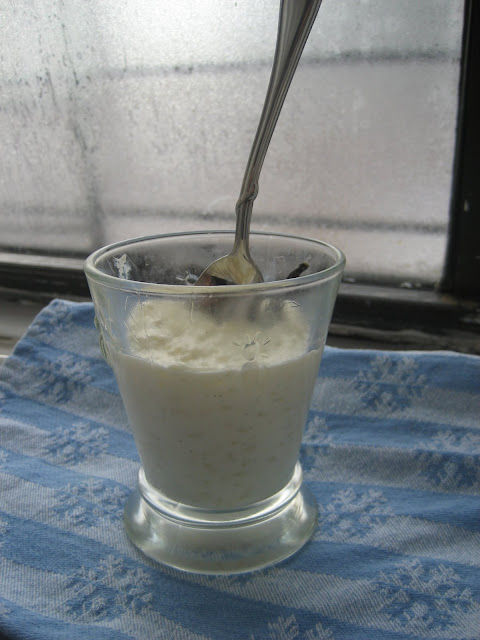 Note: Seeing as I hate rice pudding (I know, I know) my roommate Julia, who is a kitchen whiz in her own right, graciously offered to guest blog this recipe. Her thoughts are below.

My roommate, the lovely Sweet Tarte, has an aversion to rice pudding. I cannot understand it, but we've decided that being as she despises it, and I love it, I would guest-blog and make the Tuesdays With Dorie recipe this week.

And oh, how happy I am with this decision. For one, this meant I had an excuse to make rice pudding for the first time, and additionally, it meant I got to eat it all myself. I can't explain why it has taken me this long to make my own -- I've always loved rice pudding. I loved the cinnamony rice pudding my mom would make whenever we had leftover brown rice. I loved the semoule au lait my host mom in France would make for us when I stayed there for a summer. I love the Kozy Shack rice pudding, which I far too often succumb to buying (how am I to resist it when it goes on sale at the grocery store?). I love the riz au lait I would buy at the grocery store in Nantes, where I studied abroad in college. Despite all of this, though, I have never made it at home. 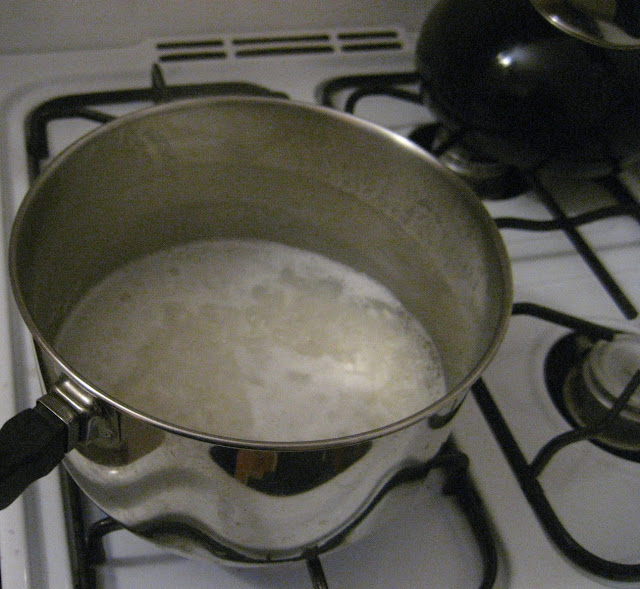 I think it is my fear of rice-cooking generally that has held me off of making rice pudding myself. I have had too many pots soaking with burnt rice, and too many crunchy grains of brown rice with my stir fry to feel confident in my ability to make rice pudding.

Of course, Dorie came to the rescue. I was nervous about the recipe, but not just because of my rice-cooking fears -- no raisins? No cinnamon? Just vanilla or ... chocolate? Really? Chocolate rice pudding? And further, isn't this *Baking* with Dorie? How am I subbing in on the one day that the recipe does not involve turning on the oven?

So, clearly, I was skeptical. Fortunately, I had no reason to be. As evidenced by the fact that I have consumed 2/3 of the pot by myself in the past 12 hours. 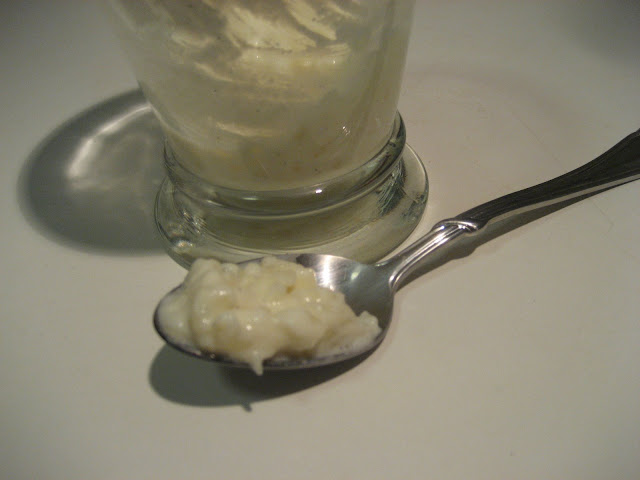 Now, as for the recipe, I was fortunate to read the comments about the rice pudding after Dorie herself posted with a correction to the amount of time it needs to cook. So I parboiled the rice per the instructions, and then let it simmer with the milk and sugar for about 55 minutes, rather than the 30 minutes mentioned in the book. The result was thick, creamy, and delicious.

I couldn't get over my skepticism about the chocolate though, so I stuck with the more traditional white pudding, using half a vanilla bean instead of vanilla extract. I love the result. As recommended by Dorie, I had a comforting cupful last night when I got home around midnight, and then... well... somehow I managed to justify having more for breakfast. Hey, it's mostly milk, right? How is it any different from, say, oatmeal? Besides fiber content, of course...

Anyway, thanks to Isabelle at Les gourmandes d'Isa for choosing such a great recipe! Merci!
Posted by Rachel at 12:13 PM

I think rice pudding is one of the foods that people either love or hate. I *love* it! My favorite recipe is my grandmoether's Portuguese Rice Pudding - it requires constant stirring for about an hour... it is so worth it!

I am not a rice pudding fan either.

Your rice pudding turned out so thick and beautiful! Great job!

Nice guest post :) And yes, we've documented quite well that nearly all of Dorie's recipes are breakfast-acceptable.

there is nothing wrong with a little rice pudding for breakfast! great job!

It looks so deliciously rich and creamy!!