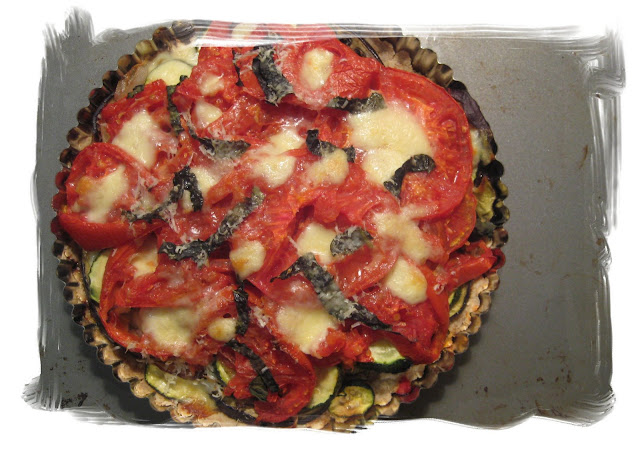 Last 4th of July I was out on Long Island with a friend's family, and it rained all day. We decide that our best bet for saving the day off was to go to a movie. Surprisingly, my friend, her sister and I, all in our mid-twenties, wanted to see the same thing: Ratatouille.

The theater was packed with families and small children, but we were lucky enough to find three seats together. Behind us sat a boy, about 5 or 6 years old, who was saving a seat for someone else (we presumed one of his parents). He was doing a good job of guarding their territory, until, growing impatient, he decided to venture out into the aisle to see if he could figure out what was taking his absent parent so long. In the two seconds he was away from his spot, someone else took his seats. (In their defense, they were oblivious to the fact that he had been saving them). Thankfully, there were two empty seats next to us, which we quickly offered to him. He thanked us, sat down, and then turned to me and said "Allow me to introduce myself. My name is Adam. And you are?" Seriously. We followed his instruction and introduced ourselves, and quickly learned that he was indeed saving the extra seat for his mother, who was off getting him popcorn. We also learned that he had a brother who was at camp, a sister who was at home with his father, and that his favorite movie was called "Silly Movie" but that he didn't think we'd enjoy it because it "contained some bad words." Our mature little friend was then silent for a few minutes, but right before the previews started he tapped me on the shoulder. "Excuse me," he said. "But aren't you three a little old to be at this movie?" "What do you mean?" I asked, stifling a laugh. "Well," he began slowly, "This is a cartoon. It's for kids. And you guys look like you're teens. You know, as in teenagers?" I smiled and explained that even "teenagers" like a good cartoon now and then. 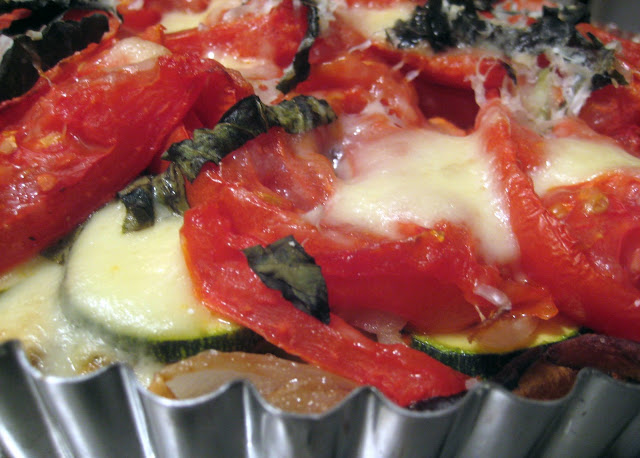 Suffice to say, he was the most precocious six year old any of us had ever encountered, and is no doubt destined for great things. I think that this ratatouille tart is also verging on greatness, but it's not there yet. Oh don't get me wrong, it's good. But you know the scene in the movie where Anton Ego takes his first bite of Ratatouille's ratatouille his eyes close, a smile spreads across his lips, and he is transported to another place? Well I was hoping it would be that good, but after my first taste I was still sitting wide eyed in my kitchen.

Luckily, I think that there are some pretty easy change that will make this great, if not Ratatouille sublime. First, I wasn't crazy about the Cornmeal crust, and if I make this again, I'd use a more traditional crust, or perhaps even frozen puff pastry. Second, while the original recipe instructs you to roast the vegetables until soft but not browned before putting them into the tart, I think that a longer initial roasting time would impart more flavor. Finally, I wouldn't be too concerned about the amounts of olive oil, salt and pepper called for in the recipe. Use enough oil to lightly coat the vegetables, and season until they taste right to you. And remember: Anyone can Cook! 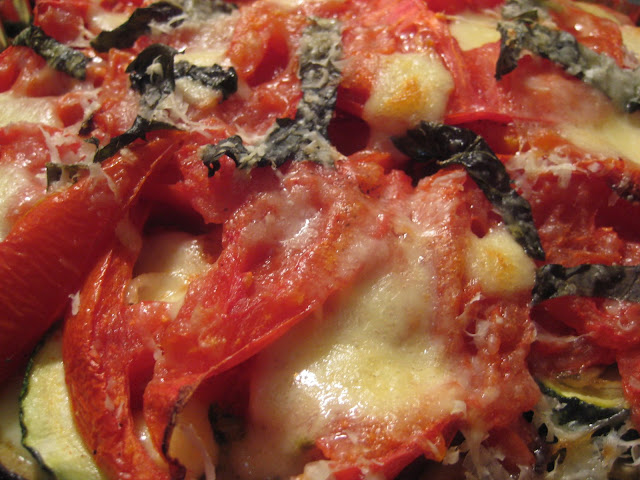 That tart looks delicious! Keep going for your perfect version though...I'm sure you will attain that special one which will "transport" you :)

This looks beautiful! They say that we eat with our eyes first. It must be true, because your tart has made me hungry!

I've died and gone to heaven! One of my favorite things on earth of ratatouille... what could be better than to have it in a crust??

I'm with you, though... not much on cornmeal... would try it with a different crust.