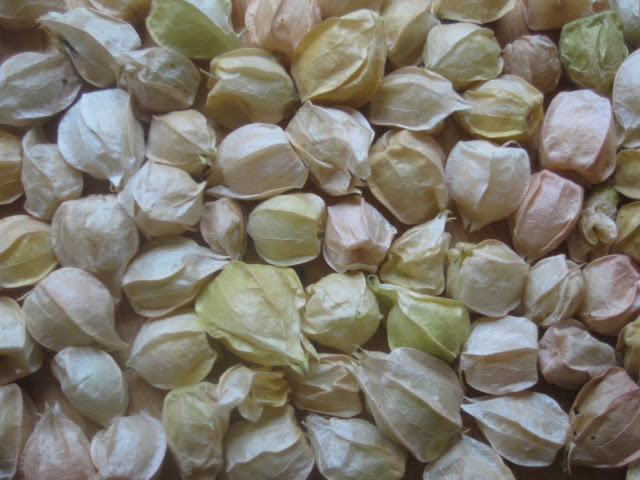 I had a lunch date with my brother today, and I found myself downtown* early with a little time to kill. I decided to take a stroll through the Union Square Greenmarket, but resolved not to buy anything because 1) I was headed to aforementioned lunch and 2) Truth be told, I do much more eating out than eating in on the weekends, and I feared that anything I bought would likely idle on my counter top until at least Monday night. I managed to keep my distance from anything that might tempt me into a purchase, until I spotted what appeared to be a pint of artfully wrapped candies among the cherry tomatoes. 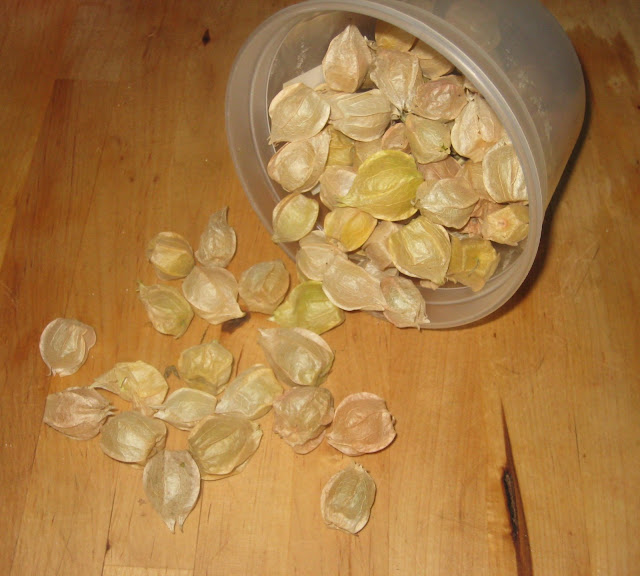 Coated in a tan, paper thin skin cast with hints of pink, yellow and green, the mystery fruits were decidedly exotic, yet, oddly familiar looking. I soon realized that they must be the ground cherries I had read about earlier this week on Nosheteria. "Are these ground cherries?" I asked the woman busy frying up a pan of peppers for her hungry customers to sample. She shook her head and pronounced them "husk cherry tomatoes." Well whatever they were, I wanted to try them. I grabbed a pint and headed to the cashier. "Are these ground cherries?" I asked again. He shook his head. "cape gooseberries." Three names? The plot thickens. Now I was even more intrigued. But then I remembered. I had resolved Not. To. Buy. Anything. I sighed and replaced the pint of mystery fruits back among the cherry tomatoes, convincing myself that they would still be there next week. I got about two blocks away before I was plagued by doubt. There were only three or four pints of them, and they would likely be gone soon. What if this was their last appearance of the season at the Greenmarket? What if this was my one and only chance to try ground cherries or husk cherry tomatoes or cape gooseberries or whatever they were? Needless to say, I practically sprinted back to the market and purchased a pint. So much for my resolution. 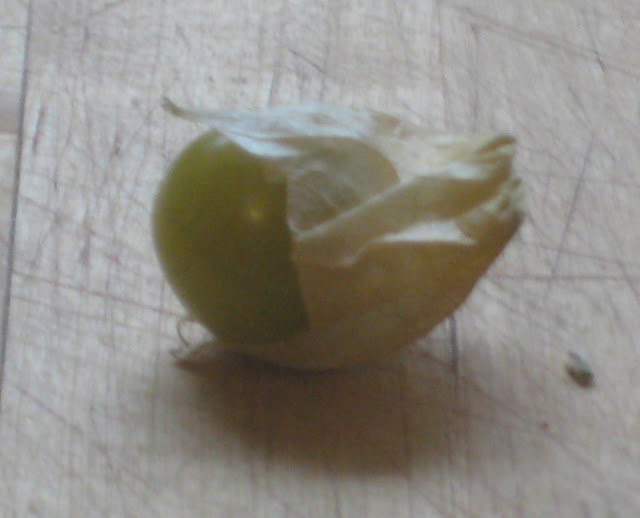 I grabbed one out of the bag and eagerly peeled back the skin to reveal a greenish orb about the size of a grape tomato. I popped it into my mouth and....it was sweet, and tangy, and tasted like a cross between a grape tomato and a pineapple. I tried a few more and discovered that a few of them had an aftertaste that was almost bitter. But they were good. Good enough to eat approximately ten more of them on my way to lunch. After my brother and I placed our orders at Haru (chicken teriyaki for him and sashimi salad for me) I opened my bag to show him my find. "Try one" I urged. My brother, who does not particularly like tomatoes, or, lets be honest, most vegetables (we're talking about a guy who thinks that the two most important ingredients in any salad are bacon and ranch dressing) was skeptical, to say the least. "They look a little exotic," he said nervously. But he bravely accepted one and brought it cautiously towards his lips. "Sweet" he pronounced. "And seedy. But I like it." I tucked away the rest of the fruits and offered him a bite of my salad. "No thanks," he said. "That's a little too exotic for me." So there you have it--the ground cherry. More exotic than chicken teriyaki, but less exotic than sashimi salad. 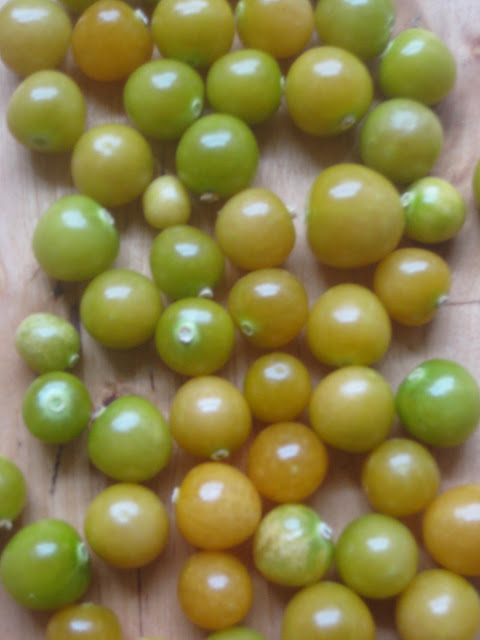 By the time I arrived home, I'd eaten another handful of the cherries raw, and was eager to see what they'd taste like after having been cooked. A quick rummage through the refrigerator revealed some goat cheese and a couple of slices of multi-grain bread, so I decided to roast the rest of the cherries to make a topping for some crostini. After being cooked, the fruits were sweeter and less tangy. Any traces of bitterness were gone, replaced with a rich, almost nutty flavor. Paired with the goat cheese and the toast, the roasted ground cherries made a perfect afternoon snack. And they didn't spend even five minutes sitting idly on my kitchen counter. Maybe I should start cooking on the weekends more often. 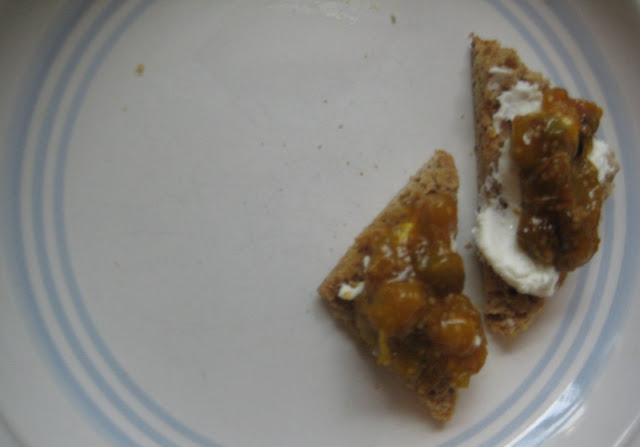 1 pint ground cherries**
1 oz goat cheese
2 slices multi-grain bread
1 garlic clove
olive oil
kosher salt
Preheat the oven to 375 degrees. Remove the ground cherries from their husks, and toss them with a generous drizzle of olive oil and a sprinkle of kosher salt. Spread cherries evenly on a baking sheet, and roast for 20-30 minutes, shaking the sheet to rotate the cherries occasionally, until they are browned and very soft. Return cherries to a bowl. Add 1 teaspoon of olive oil and stir until half of the cherries form a spreadable puree, leaving a few of the cherries whole if possible. Meanwhile, cut two slices of bread into triangles (I only had multigrain, but virtually anything would work here). Brush each triangle with olive oil, and rub each slice with the clove of garlic. Bake triangles in the oven until toasted and crispy, about five minutes. Spread each toast with goat cheese, and top with ground cherry puree.

*Seeing as I live in Morningside Heights, I consider virtually everything below 96th Street "downtown." But this time, it really was.


**A quick Google search revealed that Ground Cherries and Husk Cherry Tomatoes are names for the same plant. The Cape Gooseberry is a different but closely related variety.
Posted by Rachel at 3:37 PM

I liked your story...and your brave sweet brother. I think he trusts you. : 0

I've never heard of these!! very intriguing. Thanks for the great post.