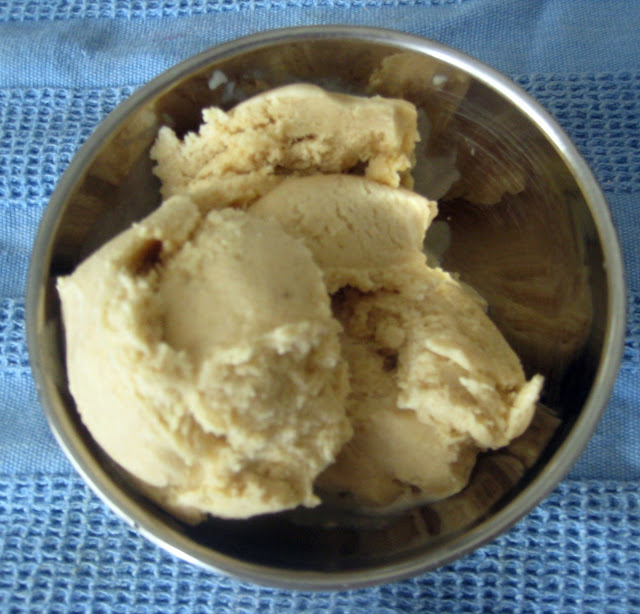 My twelfth grade English teach told us about her first memory. She had lived in an apartment complex growing up, and every day, she and her siblings would go out to play on their building's playground. One day, she walked over to the fence at the edge of the lot, and peaked through a space between the planks. Her first memory is of what she saw next door: another playground, and another apartment building. She realized that there was a whole big world out there, and explained that many scientists believe that our first memory is often of a monumental experience that changes the way we see the world.

I found her proclamation slightly horrifying, because my first memory was not quite so profound. I was sitting in the front compartment of a grocery cart at our local supermarket, and my mother handed me a wafer cone filled with rainbow sherbet. "And?" you ask? Well that's just it. There is no and. My first memory was of ice cream. Not eating it, or sharing it with someone important, but just the existence of ice cream. Clearly I had my priorities in line, even back then.

Fast forward to the present day, and I still love ice cream. So much so, that it's been a little bit of a problem lately. Remember the ice cream sandwiches I made last week? I bought a quart and a half of vanilla for those...and it lasted less than a week. Hello my name is Rachel and I am an ice cream-a-holic. After that, it was time to stage an intervention. So I vowed not to buy any more ice cream for the rest of the month.

I remained steadfast for about five days, and then this happened. 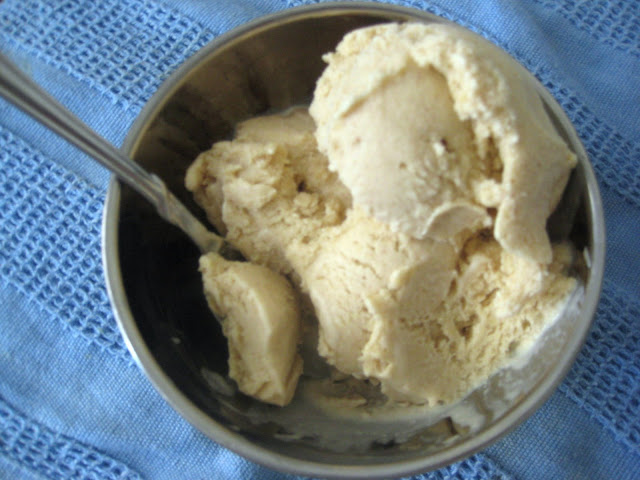 But wait! I can explain! I had promised not to buy any more ice cream for the rest of the month...I never said anything about making ice cream. Oh yes. I have obviously learned something in law school.

Truth be told, I have been dying to try my hand at making my own ice cream for some time now. My small budget and even smaller kitchen don't really allow for an ice cream maker, so I was thrilled when I came across ice cream master David Lebovitz's instructions for making ice cream without a machine. I wasn't expecting much, but figured it couldn't hurt to give it a try.

First, I warmed milk, salt, sugar and egg yolks in a saucepan. When the custard had thickened slightly, I poured it into a bowl of heavy cream. 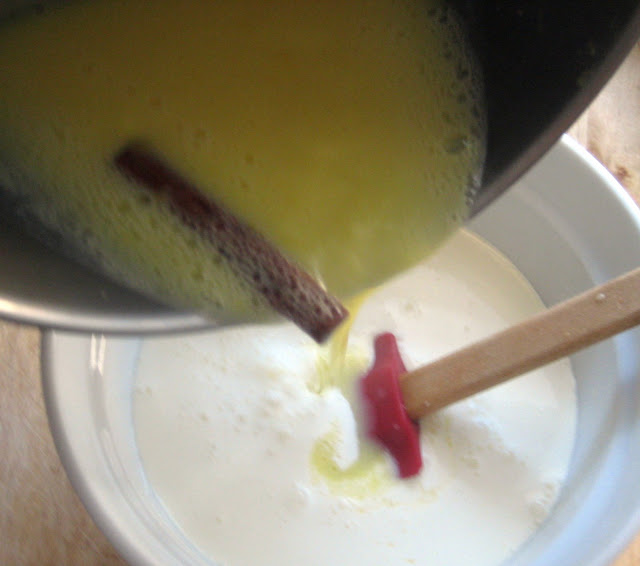 I added some vanilla and cinnamon to the mix... 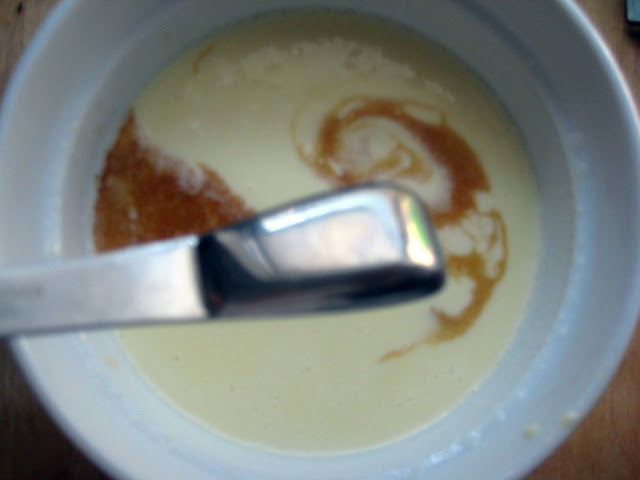 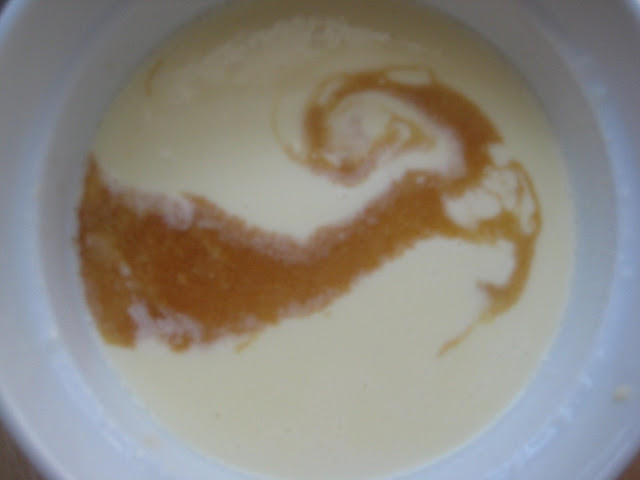 ...and popped it into the freezer. Then I waited. And waited. 45 minutes later, I opened the door excitedly to find....that my ice cream mixture was still a liquid. But I dutifully checked it every 30 minutes for the next couple of hours, whisking vigorously each time. 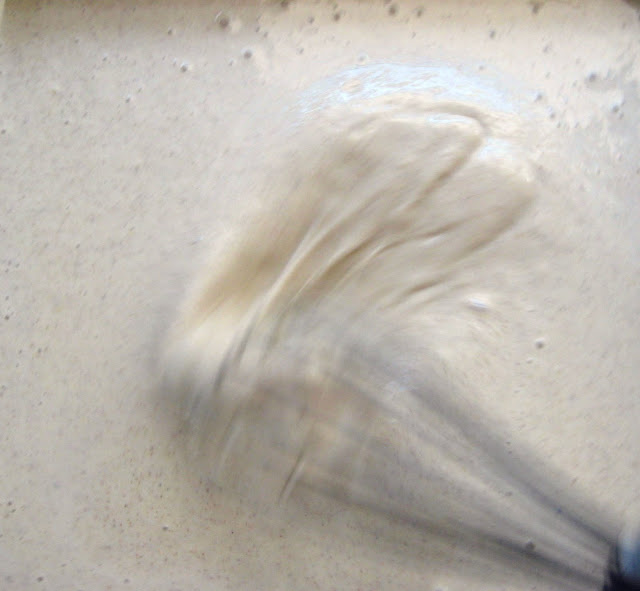 When the ice cream mixture grew harder, I traded in my whisk for an immersion blender. And finally, it looked like this! 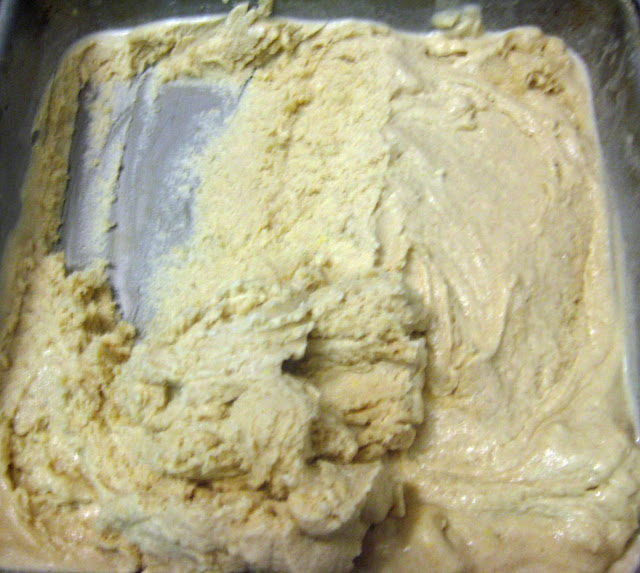 My cinnamon ice cream is sweet, delicious, and almost obscenely creamy. And it was so easy to make, I may never have to buy ice cream again. Unless I find myself in the grocery store craving a rainbow sherbet cone. You can't fight your destiny. 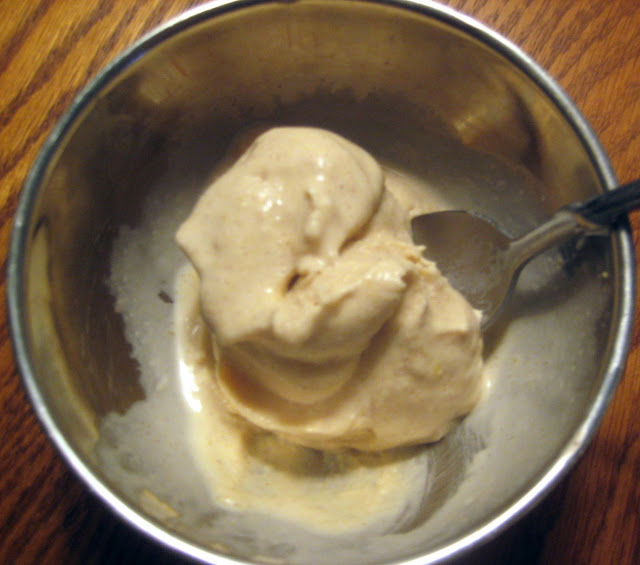 Warm the milk, sugar and salt over medium heat. Add the cinnamon stick. Meanwhile, whisk the egg yolks in a small bowl. Add a little bit of the warmed milk mixture into the yolks, and then pour the yolks into the saucepan with the rest of the milk. Cook over low heat, stirring, until the mixture coats the back of your spoon or spatula. Pour over the heavy cream, and add the vanilla and ground cinnamon. (I found it easier to add the cinnamon slowly, whisking as I went so that the cinnamon dissolved. I started with 1 teaspoon, and added more to taste).

Pour into a deep baking dish (I used an 8x8 pan) and place in the freezer. Check your ice cream after 45 minutes. It may be beginning to freeze around the edges. Whisk vigorously. Continue whisking the mixture every 3o minutes. When it starts to get harder, you may want to use an immersion blender, instead of a whisk (If you don't have one, a whisk should work just fine). After a few hours, your blended mixture should be the consistency of ice cream (David Lebovitz suggested that it would take 2-3 hours, but mine took closer to 4). Scoop and enjoy! You can save the rest of your ice cream (if there is any leftover) in a covered container in your freezer. My batch made about 3.5 cups.

Oh geez- this looks soooo good- I'm a sucker for ice cream too. Can just envision this melting over the top of a slice of apple pie...

i have a thing for icecream too. can never resist that. And with a flavor like cinammon combined with the likes of david.. i'll give this the green light anytime!

I love your story and cinnamon ice cream is just about as good as it gets.

What a well-written post! I love the part about our earliest memories. Mine was nothing spectacular. I was standing by our living room picture window and a neighbor came up on the other side of it. She put her hand against the glass and then I put my hand on my side of the glass. I remember how little my hand was compared to hers.

I'd rather remember ice cream...