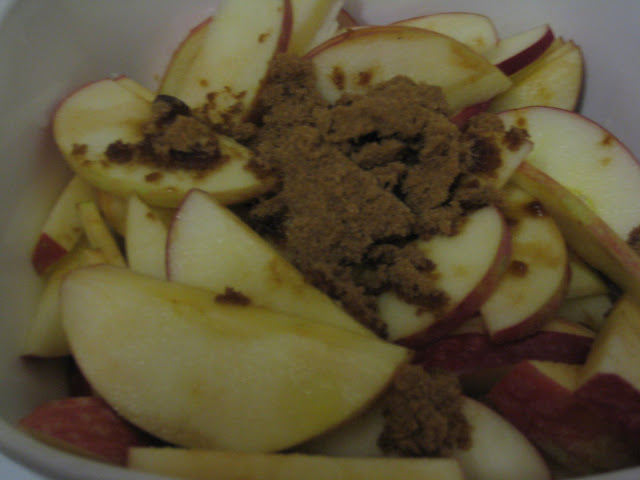 I spent the last few weeks of August in the Midwest, and when I returned to New York, it felt like fall. Sure enough, last week's trip to the farmer's market revealed a flood of early fall produce, and I can't wait to try it all. However, being that it is still technically summer, I decided that I should show some restraint and resist the urge to haul home half my weight in butternut squash. Instead, I picked out four perfect looking Paula Red Apples, which I fully intended to make my snacks for the week.
Well, as you can see...that didn't happen. Instead, I made this semi-healthy yet still delicious Apple Oatmeal Crumble. I ate half of it right out of the pan, and upon waking up the next morning, convinced myself that it was so semi-healthy that other half would make a perfectly reasonable breakfast. (Apples and oatmeal? Sounds like health food to me!) Not that I need an excuse to eat dessert for breakfast, but if that doesn't make you excited for the start of fall, then I don't know what will.
Apple Oatmeal Crumble
Adapted from Gourmet, October 2003
(See the original recipe here)
3 Apples, cored and thinly sliced
3 T dark brown sugar
1T lemon juice
1/3 cup oats
1 pinch cinnamon
1 pinch nutmeg
2 T walnuts, chopped
1 T butter, cold and cut into pieces


Preheat oven to 375. Slice apples and place in a baking dish. Cover with the juice of 1 lemon and a 1 heaping tablespoon of brown sugar. Bake for 20 minutes, stir, and bake for another 20 minutes, or until apples are tender and beginning to brown. Meanwhile, combine the oats, cinnamon, nutmeg, walnuts and remaining brown sugar in a bowl. Add the butter and mix together until it is incorporated. Spoon topping over apples and bake for another 20-30 minutes, or until topping is soft and golden.
Posted by Rachel at 10:12 PM